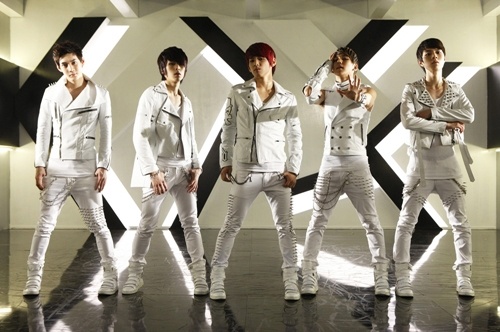 An acoustic version of MyName’s “Message” was revealed to the public.

The five member boy group, MyName recently appeared on the KBS 2TV’s “Music Bank” with their debut song, “Message.” This time around the boys showcased an acoustic rendition of their title song.

It was an attempt at a completely different genre of music for the rookie group. MyName joined forces with a female duo from Hongdae, Rooftop Moonlight, for their farewell performance. An unusual pairing since MyName is known for their intense dance tracks. The indie duo and idol group worked together to bring out the emotions of the track. The result of this collaboration was a sweet and romantic version of “Message” to the delight of fans, who were pleasantly surprised that the song sounded so good in this style of music.

MyName and Rooftop Moonlight had a unique bond prior to their “Music Bank” performance. The groups originally met during MyName’s reality show, when MyName would perform live. The members of MyName had this to say, “We had prepared this special version for our fans as a present to thank them for their everlasting love and support.”

During the performance, the members of MyName showed that they are multi-talented. They substituted their existing strong choreography skills and opted for playing musical instruments instead.

The lovely performance can be viewed below.

Which version do you prefer?

KBS 2TV
How does this article make you feel?