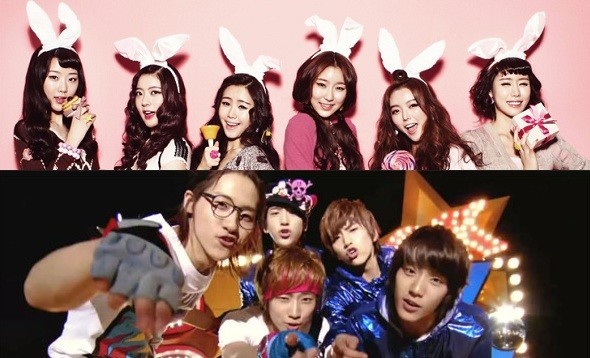 Several rumors have been circulating online between fans of B1A4 (called ‘Banas’) and Dal Shabet (known as ‘Darlings’). The severity of the most recent rumors has crossed the line, causing police officials to intervene.

The rivalry between the fandoms can be traced back to “2011 SBS Gayo Daejun,” during which B1A4 and Dal Shabet had shared a special stage. But the choreography called for body contact between the members, and it has caused fans to become upset. From this criticism and hate spawned speculative rumors. In one such rumor, a Darling was accused of physically assaulting a Bana. While another claimed Dal Shabet’s Serri had blatantly rejected a B1A4 member who extended his hand in a friendly greeting.

The rumors only worsened after the “Idol Star Athletics Championships” took place. The online community boards were swamped as fans posted several claims stating that Darlings had assaulted Banas and had even, allegedly, raped and kidnapped the opposing fans.

The rumors spread like wildfire causing the police to get involved. Police officials revealed, “There weren’t any disturbances or crimes committed during the ‘Idol Star Athletic Championships. There was nothing out of the ordinary that occurred, nor were there any reports of such behavior.”

Happy Face Entertainment commented on the matter, “The hateful rumors have caused much pain to the Dal Shabet members. We hope that the spread of these false rumors will end.”

Serri even used Twitter to respond to the rumors, “I am writing to say how deeply upset I am at the horrible rumors being spread about me. Please stop spreading these lies, they are not true. Please stop haunting celebrities with these harmful rumors.”

Dal Shabet and B1A4’s agencies have come to an agreement to not let these rumors affect themselves or their relationship.