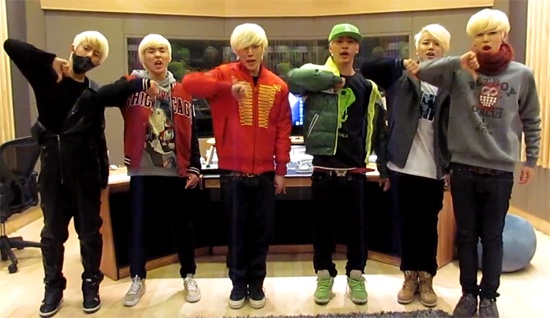 The six member rookie group from TS Entertainment, B.A.P, has uploaded an introduction to their YouTube channel. The video is a teaser released in preparation for the first episode of their reality series, “Tadah! It’s B.A.P” The first episode aired Sunday on SBS MTV. Already there is much anticipation surrounding the group (thanks to their pre-debut promotions) and it will only continue to rise with their reality show.

In the video the members can be seen sporting various hip-hop garb as they line-up and introduce themselves. The boys give off this military vibe as they all have similar blonde hair styles and respond, “Yessir!” while standing in a straight line. Their introduction is full of energy. The group’s name, B.A.P appropriately suits their military-like image, since their moniker is an acronym for “Best Absolute Perfect.”

“Tadah! It’s B.A.P” will differ from other reality shows. The members will take on the roles of aliens from another planet, that are working toward their goal of taking over the world. Secret member Hyosung will make an appearance to give the fellas their debriefing.

The group is scheduled to make their official debut through a special showcase at the end of January.

So far, what is your opinion on B.A.P?