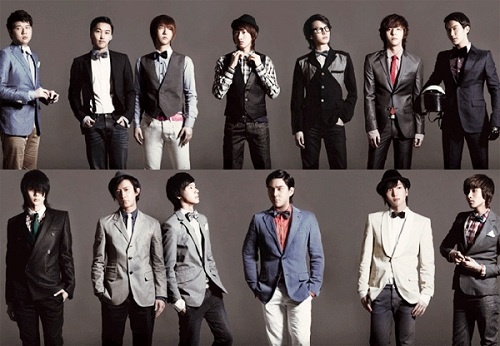 Perhaps a bit overdue, but SM Entertainment announced today that Super Junior has won three awards at the “2011 Mashable Awards.” They were picked as the “Must-Follow Musician on Social Media,” “Viral Video of the Year,” and “Best Mobile Game.”

For the “Must-Follow Musician on Social Media,” Super Junior won more votes than Lady GaGa, Snoop Dogg, and Ricky Martin, proving their global prominence. Their music video for “Mister Simple” was the “Viral Video of the Year,” while the “Super Junior Shake” was named the “Best Mobile Game.”

This is not the first time that Super Junior has won the Mashable Awards, as they were also named the “Must-Follow Personality” in 2010. They were also placed #4 on the “2011 Top Trending Topics in Twitter” by Mashable, becoming the only Asian artist to rank in the top 10 list.

This year marks the fifth “Mashable Awards.” It picks winners across 28 different categories, by naming the most influential person, product, or service through online voting. The awards ceremony will be held on January 11 at the Consumer Electronics Show in Las Vegas, but Super Junior will not be able to attend the event due to their schedule with the “Golden Disk Awards” in Japan. Congratulations!

Super Junior
Lady GaGa
Snoop Dogg
How does this article make you feel?