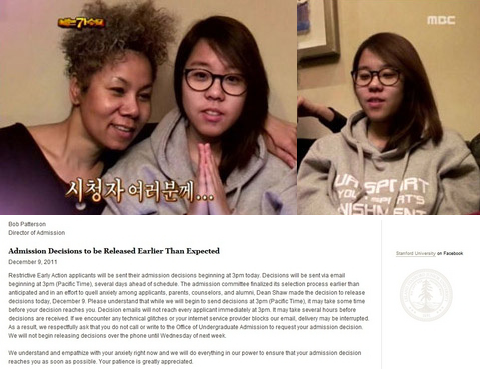 In December, after singer Insooni was notified of her daughter’s acceptance into the prestigious Stanford University in the States, her daughter was also criticized and cyber attacked by an online community called Tajinyo.

Tajinyo is an online community that initially attacked Epik High‘s Tablo. It means “We demand the truth from Tablo.” Tajinyo’s leader Whatbecomes said, “Colleges send out their acceptance letters during May. There is no college that notifies applicants in December. It is impossible. And there is not one college that notifies applicants through email.”

Contrary to what Whatbecomes has stated, the Stanford admissions news page showed that Stanford did in fact notify some applicants earlier. In addition, Stanford does notify applicants through electronic mail. So it was true that Insooni’s daughter was accepted into the school.

Whatbecomes did not even do enough research before looking for ways to criticize her. He made harsh comments and made assumptions about things that he was not knowledgeable of. As a result, he has given Insooni’s daugher “a scar that cannot be washed away.”

Whatbecomes first appeared in the Korean media during 2009 after denying the fact that Tablo graduated from Stanford. After it was confirmed that Tablo graduated, the online community halted its activities. However, starting from October, the internet cafe is now active, and has targeted not only Tablo but also Insooni’s daughter and singer Park Jung Hyun.

More information regarding Tajinyo and Whatbecomes can be found here.

Insooni
Stanford University
Tajinyo
How does this article make you feel?