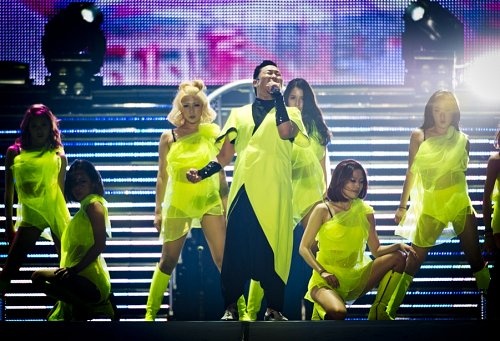 PSY who is everyone’s celebrity is currently garnering attention in Japan! PSY appeared on the “YG Family 15 Year Anniversary Concert” which went on from January 8-9. PSY is gaining attention because his performances are quite “different” from the other Hallyu stars.

Fuji TV’s “Mezamashi TV” introduced PSY as a top singer who has nearly 11 years of experience that also has ticket selling power for concerts.

During PSY’s stage at the “YG Family 15 Year Anniversary Concert” he wrote funny subtitles in Japanese when introducing himself. They read “In Korea I am famous as a singer that makes the audience go crazy. However, here today I am just a chubby newcomer.”

He performed his stages with his flashy and humorous attire. The stage also had a large balloon that looked just like him.

The YG Family Concert in Japan will continue on in Japan. They now move on to Japan’s Saitama Super Arena on January 21-22.

fuji tv
PSY
YG
YG Family Concert in Japan
How does this article make you feel?