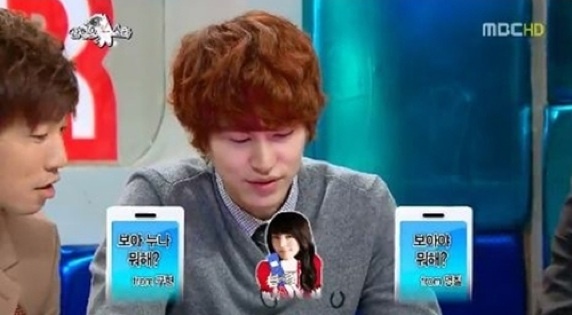 Comedian Kim Young Chul and Super Junior’s Kyu Hyun sent texts to BoA in a contest to see who she replies to first.

On January 11, MBC’s “Golden Fishery-Radio Star” broadcasted a special on comedians under the same company.

The MC’s chose Kim Young Chul as the star who has the most connections. Kim responded by bragging, “BoA always calls me whenever she’s in Korea.”

He continued by asking Kyu Hyun, who is in the same company as BoA, “You’re close with BoA too, right?” to which he replied, “She is a good older sister.” This resulted in the MC’s suggestion on having both Kim Young Chul and Kyu Hyun send BoA a text message simultaneously to see who gets a better response.

While waiting for her reply, they browsed through Kim Young Chul’s previous texts with BoA. Though Young Chul’s message to BoA was long and detailed, her replies were short, such as “Okee” (Okay), resulting in laughter within the studio.

In the end, despite Kim Young Chul waiting anxiously for BoA’s text, she only replied to Kyu Hyun causing another bout of laughter at the studio. The show’s host Kim Gu Ra even caused Kim Young Chul to scream in frustration by telling him, “You’ve been used.”

Translations from the photo above.

1. Sending a text message to BoA.

(Right) BoA, What are you doing? – Young Chul

BoA
Golden Fishery
How does this article make you feel?