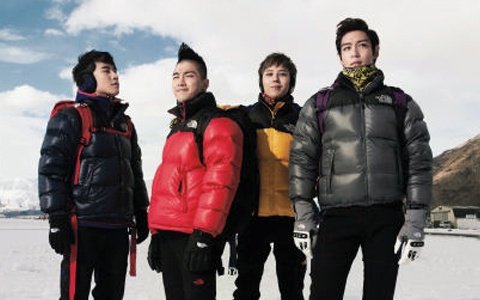 K-Pop fans are sure to remember the recent ad campaign for the North Face. Popular group Big Bang was chosen as the celebrity endorsers for the brand. The campaign had even taken the members to New Zealand for promotional photo shoots and commercial filming of the fellas and gear in action.

It appears that the North Face jackets are a hot commodity in Korea. In fact they might be too hot (this is not a reference to the jackets warmth). The down jacket has become something of a status symbol in the Korean school system; where it has been dubbed as “backbreakers” (for the hard work that went into being able to afford one). Due to the violence surrounding the jackets, they have also synonymously become an indication of being part of a gang.

Most recently, five Busan middle schoolers had gone around pilfering North Face jackets. They had beaten four students and stole their jackets. One of the students arrested explained the reason behind the theft, “I just wanted the North Face jacket.” The violent rampages surrounding these jackets have been quite the issue as CNNGO even covered the topic.

Sure, the jackets are plenty warm for the brutal Korean winters, but that is not why these jackets are in demand. First off, the jackets are made by an American company, so they are foreign. Anything foreign is going to be rare and sought after. Second of all, they are expensive– A sure sign of status, not everyone is capable of owning one. Third, idol endorsement. Just because top stars were seen wearing something it becomes an instant must have item.

Lastly, it is a brand name. Most of the world equates the brand with hardcore outdoor enthusiasts. In this case it has nothing to do with the jacket’s style. A stylish Korean jacket can be bought for considerably less and would be just as warm.

Certainly none of the aforementioned reasons warrants this type of behavior. At times fashion and fandom get out of hand. The desire behind something spirals out of control that it only leads to violence. Enough is enough!

What is your opinion on the matter?

Big Bang
North Face
How does this article make you feel?