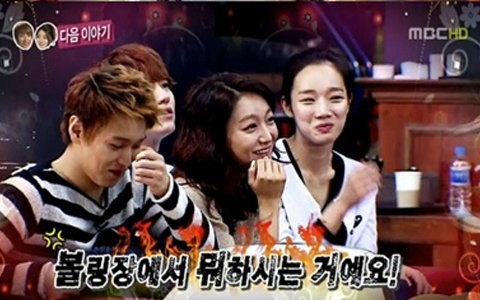 Members of Super Junior go on blind dates with actresses for an episode of “We Got Married.”

It was hinted at by the producer of MBC’s “We Got Married” that fans could expect to see four members of Super Junior along with four actresses to be featured on a future episode. Upon the conclusion of the January 14 broadcast, a teaser was unveiled for an upcoming episode of “We Got Married.” Super Junior and various actresses were revealed to appear in next week’s episode. This episode was all thanks to the pretend couple of Super Junior’s leader Leeteuk and actress, Kang So Ra.

The lucky guys will have the opportunity to date each of the four actresses. In the end the decision for the next couple will be made.

The response of netizens was varied, “It feels like I’m the one who is sending my son off to marry,” “I don’t think their ages match up well with each other,” “I definitely won’t be missing next week’s episode,” “Good thing it isn’t a big deal.”

Son Eun Seo’s drama “My Daughter My Flower” is currently airing on SBS. Lee Sena and Shin So Yul have appeared on the SBS drama “The Tree with Deep Roots” which had its finale last month.

You can view the teaser for next week’s episode of “We Got Married” below.

What’s your opinion of the episode after watching the trailer?