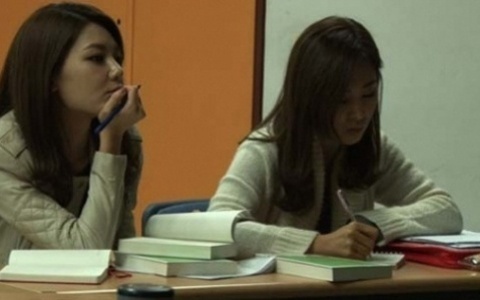 With K-Pop exploding in popularity over the last few years, many fans find themselves being more immersed in the culture. As news gets translated from Korea, there are many terms and concepts that are repeatedly used. Through this K-Pop Culture Glossary, we hope to help new fans get a better understanding of phrases that are often used in the industry.

If you listen to a lot of K-Pop, keep up with news, watch Korean Dramas or variety shows, you probably have heard many of these terms and concepts before.

Let us know in the comments if you think anything important is missing or wrong! This glossary will be continuously updated.

Aigoo : An expression to show ones frustration or exhaustion.

Age : The Korean age system starts with being “1” at birth. Also, regardless of the exact birthdate, people are considered a year older as soon as a new year begins.

Age Line: given to people that were born the same year. Ex: Minji, Sulli, Krystal and Jiyoung are from the 94-line.

All-kill : When an artist has the #1 song or album on all the legal music download sites, such as Melon, Dosirak and Soribada. An all-kill on a daily chart (on the day of a new release) is normal for most popular groups. Weekly and monthly chart all-kills are much more difficult.

Anti-fan: “Anti” for short.” It is a person who expresses hated of a celebrity. For more info, read Anti Fans and Their Power in the Music Industry.

Bagel Boy/Girl : A way to describe how a person looks. “Bagel” is the combination of the words “baby face” and “glamorous body.” For men, it is changed to “gladiator body.”

Banmal and joen-dae mal : Banmal is informal speech that is to be used only with those close you or younger. It is very rude when used speaking to someone older or if a certain level of familiarity has not been established. Joen-dae mal is the polite form of speech.

Big 3 : The name for the three major entertainment labels in K-Pop : SM Entertainment, YG Entertainment, and JYP Entertainment. They are very dominant in the K-Pop world and make a huge majority of the income. With their recent growth in the industry, Cube Entertainment is sometimes added in, which makes it the “Big 4.”

Chuseok : A Harvest Festival celebration, similar to Thanksgiving in America.

Comeback Stage : The first performance in a music program for the promotion of a new title track or single. There is no minimum time wait following the promotion of the previous title track. An artist usually has a special comeback performance on each of the music shows. During that stage, they are usually allowed to perform a second song.

Chocolate Abs : Abs that have strongly defined lines, like blocks of chocolate.

Daesang / Bongsang – Awards. While the “bongsang” award is given to a number of the top artists of the year, the “Daesang Award” is only given to the best artist of the year. Essentially, the “bongsang” is a nomination to be able to win the ‘daesang.”

Digital Single : A track that is only available through an online download.

-Dol (-돌) : Shortened version of the word ‘idol’ to be combined with another word to describe a group or person. Ex. “beastly-dols,” “model-dols,” “fairy-dols.”

Dongsaeng (동생) : Meaning “younger sibling,” it can refer to a true blood sibling, or a close friend whom you treat as a younger sibling. The word can apply to both genders.

Dream Concert : It is one of the largest annual concerts in Korea, having many of K-Pop’s biggest names appear on the same stage. The event is not to be confused with the similarly named “Hallyu Dream Concert.”

Eye-Smile : A popular facial characteristic that that has the eyes curve into a crescent shape while smiling.

Fan-chant : Words chanted by the fans to cheer on the singers during a particular song. They are created to go along with the melody. They are shouted during a part of the song when the singers are not singing, as to not disturb them. Fan-chants generally consist of names of the singers.

Goodbye Stage : The last performance on a music program before ending promotions of a song.

Hallyu : The Korean Wave. It is the term for the increased popularity of Korean culture around the world.

Hanbok : Traditional Korean dress. It is often characterized by vibrant colors and simple lines without pockets. Many idols usually have photo shoots in while wearing Hanboks for Chuseok.

(BEAST members in Hanboks for their 2011 Chuseok Greeting)

Hoobae (후배) : A junior with less experience than you in a certain field. Age is not necessarily a factor for this. For more info, read How the Terms “Sunbae” and “Hoobae” Work in the K-Pop Industry.

Hook Song : A musical or lyrical phrase that stands out and is easily remembered. The term generally applies to popular music. Because of it is frequently used in making popular music, people have complained that pop music is too reptitive.

Honey Thighs : Perfect thighs that are “sweet as honey.”

Hwaiting (화이팅) : A phrase to cheer someone on.

Hyung (형) : Means big brother and is used exclusively by the boys to an older boy than them.

Idol : General term for young K-Pop entertainers. What sets them apart from normal “singers” is that they are also trained to do other things such as act, MC, DJ model and dance.

JYP : Park Jin Young, also known as J.Y. Park. He is the founder of JYP Entertainment.

JYP Nation : name of the collective of artists from the label JYP Entertainment.

Lee Sooman: founder of SM Entertainment. He is currently the chairman of the label.

Maknae (막내) : The youngest member of a group.

me2day : A social network that was created in Korea.

Mini Album : Usually contains two to three new tracks in addition to remixes or instrumentals. It is the middle ground between releasing a single and a full album.

MR Removed : A song that has had it’s music backing removed so that only the singer’s voice is heard. They can be used to hear how well a singer can perform live

Music Program : Includes shows such as M! Countdown, KBS Music Bank, MBC Music Core, SBS Inkigayo and more. During promotions for a new song or album, performers will want to appear on these shows to promote their new release. The MCs of each program may change several times a year. Their schedules are…

Netizen : A combination of the English words ‘Internet’ and ‘Citizen.’

Noona, Nuna or (누나) : 1. means big sister and is used exclusively by the boys to a girl older than them. 2. Girlfriend in a relationship where the girl is older.

Oppa (오빠) : Means big brother and is used exclusively by girls to an older boy. It can also be used for a boyfriend in a relationship where the boy is older.

Omona : An expression. It is the Korean version of “Oh my God!”

Pepero Day: A day similar to Valentines day in people exchange Perpero. It falls on November 11 as the date looks like four sticks of Pepero.

PV : In J-Pop, the term promotional video (PV) is used instead of music video (MV).

Repackaged Album : When a full album is re-released with a new title track, in addition to other tracks and remixes. It is usually released shortly after the promotions for the first title track have ended.

Rookie : A newly debuted singer or group. They usually carry the label as being a ‘rookie’ for about a year.

Samchon Fans : “Uncle Fans.” They are the fans of an artist, despite being outside of the mainly targeted youth demographic. They are usually known for having a higher spending ability due to having regular jobs.

Ssaesang : term for the obsessive fans who follow their favorite celebrities day and night. This is similar to the term “stalker.” For more info, read Anti Fans and Their Power in the Music Industry.

Ssanti : cheap, cheesey or goofy. In K-Pop it is usually used to describe someone’s dance style.

Selca : A combination of the words “self” and “camera,” it is a self taken camera picture, usually done facing a mirror. Stars tend to post these kinda of photos in their Twitter or Me2Day Account accounts.

S-Line (에스 라인) : A term to describe a female figure with beautiful curves.

SM Town : Another name for SM Entertainment artists as a group. It is also the name for their large concert tour which features all of the label’s artists.

Sunbae (선배) : Senior. someone with more experience than you in a field. Age is not necessarily a factor for this term. Ex: the Big Bang are sunbaes of 2NE1, despite Bom and Dara being older than them. In a non-professional sense, Dara and Bom are their noona. For more info, read How the Terms “Sunbae” and “Hoobae” Work in the K-Pop Industry.

Title Track : The main promoted track in an album or single. This is the song that will have a music video and will be performed on Music Shows.

Trainee : Term for a singer/performer during their training years. The person is considered as such until they make their official debut. Training length varies, but is usually for more than two years. For more info, read Life of a Celebrity: The Sweat and Tears of Becoming an Idol.

Triple Crown : Name of the award when an artist’s song wins three weeks on the music programs M! Countdown and Inkigayo. The song is then “retired” and cannot win again. The show Music Bank does not have a win limit.

Um Chin Ah (엄친아) : A shortened phrase meaning ‘Mother’s Friend’s Son.’ They are individuals whom mothers will mention in front of their own children to compare with them (in terms of studies etc). ‘Um Chin Ddal’ is short for ‘Mother’s friend’s daughter’

UnitedCube : The name of the concert held by Cube Entertainment artists.

Unni (언니) : Means big sister. It is used exclusively by girls towards an older girl.

V-Line: A slim oval face that gets more narrow nearing the chin.

(Ga In of Brown Eyed Girls)

White Day: Celebrated in Japan and Korea, it is on March 14, a month after Valentines day. On this day, men pay back women who had gave them chocolate on Valentines day. The following month, “Black Day” is celebrated by single people. Read more: http://en.wikipedia.org/wiki/White_day

YG Family : Term for the artists belonging to the YG Entertainment label.

Did You Know Kpop
chocolate abs
s-line
SM Entertainment
v-line
How does this article make you feel?