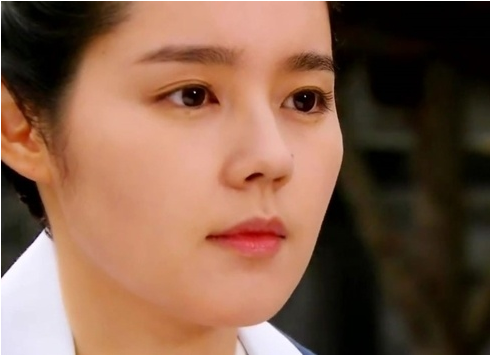 On January 20, a thread was created on an online community board with the title, “100% Natural.” It contained many different pictures of Han Ga In that quickly became a hot issue among netizens.

The pictures seemed to document Han Ga In’s growth from childhood to when she was in uniform in high school. Her high school photos especially received much attention because of her youthful and poised appearance.

As expected, netizens’ responses were hot. They left comments like “She was always pretty. College must be when she entered her goddess stage,” “What is this unni lacking?” “And she was a great student too keke. She is so pretty,” “She looks just the same” and many other similar envious remarks. It wasn’t just the females who were jealous of Han Ga In’s beauty – a popular comment amongst males was along the lines of, “And today, Yun Jung Hoon will once again get bashed for no reason at all.” (note: Actor Yun Jung Hoon is Han Ga In’s husband)

Currently, Han Ga In is playing the role of Yeon Woo in the popular MBC drama “The Moon that Embraces the Sun.”

What do you think about Han Ga In’s childhood pictures?

Han Ga In
The Moon That Embraces the Sun
Yun Jung Hoon
How does this article make you feel?