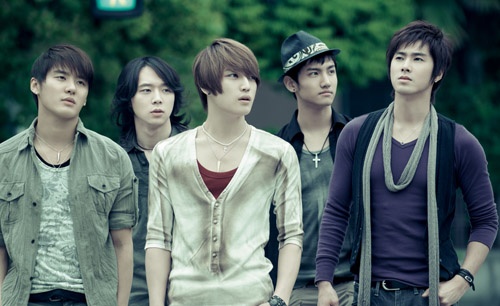 Rumors about DBSK’s reunion are increasingly being spread.

A recent Japanese news article from January 22 titled, “Who Will Be the Savior of AVEX? The DBSK Reunion Project” has been published. The article quotes a source from Japan’s music industry, “The AVEX group is going through some hard times at the start of this new year since news of Ayumi Hamasaki’s divorce has been announced. So AVEX is thinking of starting a DBSK reunion project.” Ballad music is not so hot in the market right now so the Japanese group EXILE (who is also under AVEX) is also suffering from low album sales.

This article also quotes a certain reporter, “In the beginning, AVEX maintained its management contract with JYJ but due to a breach, it was ended. So there are restraints on JYJ’s activities in Japan but if enough people participate, things will look positive. There were past problems with AVEX and JYJ such as the Japan earthquake victims’ benefit concert and other legal problems. However, in order to solve those problems, there is a current project to reunite the five members of DBSK at many different concert halls and arenas.”

However, the news article concluded that the likelihood of DBSK’s reunion is very low. It states, “There are many fans who hope for DBSK’s reunion but the current state of AVEX is not very good so it is not very likely to happen.”

Of course, this is all speculation and could just end up being one of those baseless rumors, especially since no official statement has been released from either party. However, the fact that Japanese press with a credible source is reporting on this adds weight to the veracity of the rumor. Soompi will keep you posted on any updates!

Avex
JYJ
How does this article make you feel?