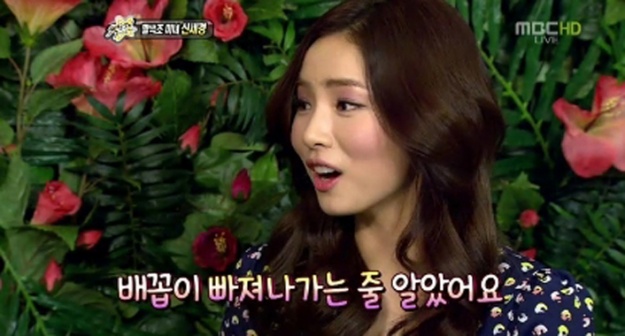 Shin Se Kyung shared the story of her appearance on variety show “Infinity Challenge.” On January 22, the actress was interviewed by entertainment program MBC “Section TV Entertainment Relay” and had some revelations to share regarding the filming of the show.

She explained, “I thought my belly button would pop out,” revealing how much fun she had guest-starring on “Infinity Challenge.” She continued, “The filming of the episode lasted long, but I didn’t even feel tired. I had so much fun,” laughing as she remembered the funny moments of that day.

During the interview, when Shin Se Kyung was told that she was referred to as a “Natural Beauty,” she commented, “No matter how many times you hear it, it always feels good, it’s something you’re never tired of hearing.” But when she was told that she was also known as the Korean Olivia Hussey, she firmly showed her disagreement and couldn’t help but smile.

On the same episode, MBC “Section TV Entertainment Relay” revealed the set of drama “The Moon that Embraces the Sun“.