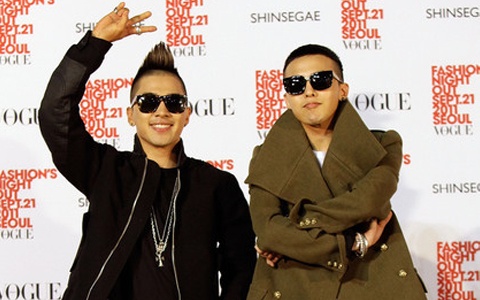 Taeyang Shares Past Photo of Himself and G-Dragon

A past photo of Big Bang’s G-Dragon and Taeyang has surfaced, and upon doing so has quickly become a topic of conversation amongst netizens.

On January 23, Taeyang uploaded a photograph of himself and fellow group member G-Dragon to his Twitter account. Along with the photo, Taeyang posted the caption, “Double dragon.”

The image was a blast from the past. The two look so young, as they are just boys. It’s likely the photo is from before they made their debut. In the picture, a young G-Dragon is seen smiling brightly while wearing a red beanie hat and glasses. Taeyang is posing with his signature eye smile as he sports cornrows and a black and white striped shirt.

The two have a strong American flair about them as their style and personalities overflow. Unlike today, the boys exude pure, youthful feelings, which make them even more eye-catching.

G-Dragon and Taeyang’s picture from their youth caught the attention of internet users who responded saying, “Both are very innocent,” “So cute!” and “It seems even back then you had the perfect V-chin!” Throughout their trainee days and even through the most difficult of times, it is apparent that Taeyang and G-Dragon’s friendship has survived the test of time as the now grown men prepare for their comeback.

What are your reactions to the photo?

Big Bang
G-Dragon
Taeyang
twitter
How does this article make you feel?