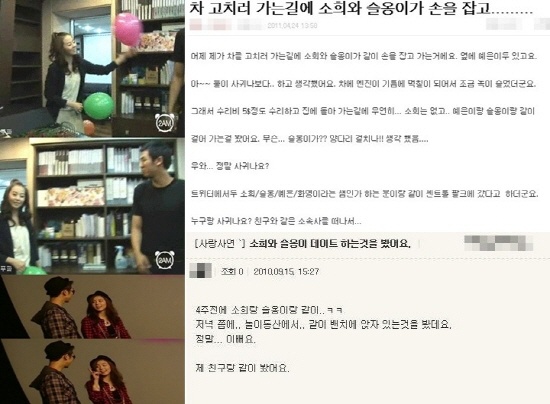 Earlier today, we reported that labelmates Wonder Girls’ Sohee (20) and 2AM’s Seulong (25) were caught dating. Local media “Dispatch” reported that the couple would avoid crowded areas and spend most of the time in Seulong’s car during their secretive dates. Well, it’s been revealed that Seulong’s car is a luxurious and stylish Audi A5 Cabriolet, and his car is getting as much interest as his new relationship with Sohee.

Seulong’s car is priced at approximately $70,000 in Korea, and a representative from his management agency revealed, “It is not a company car, but Seulong’s personal car.”

Additionally, avid netizens have been able to dig up past posts by other netizens who spotted Sohee and Seulong together before the news about their relationship broke. One netizen posted last April, “I went to go fix my car yesterday, and I saw Sohee and Seulong walk by holding hands. Ye Eun was with them as well. I think they might be dating.”

Another netizen wrote on September 2010, “About four weeks ago, I saw Sohee and Seulong sitting down on a bench at an amusement park. She’s really pretty. My friend and I saw them together.” Netizens who’ve read the past comments wrote, “I wonder how Seulong was able to win Sohee’s heart,” “Scary netizens. How did they even track this?” and “So all these observances were true!”

2AM
Seulong
Sohee
Wonder Girls
Ye Eun
How does this article make you feel?