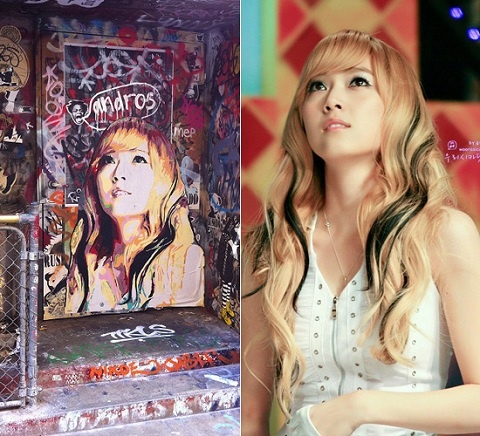 Recently, a photo of SNSD’s Jessica titled “SNSD Jessica Spotted in Melbourne” was uploaded to various internet communities, creating quite a buzz among netizens. A fan found and photographed a graffiti of Jessica at Hosier Lane, Melbourne, Australia. Hosier Lane is a popular landmark in Melbourne, well-known for its street art.

Netizens were amazed to see the artwork, especially one related to K-Pop and SNSD, at one of Australia’s popular tourist/artist locations. Netizens commented “It’s so awesome! I’m so proud,” “SNSD’s K-Pop fever has taken over Australia,” “I want to visit,” and “SNSD’s popularity and influence is growing and growing.”

Meanwhile, Jessica will make her drama debut tonight, January 25, with KBS’s “Wild Romance,” also starring Lee Dong Wook and Lee Si Young. Next week, SNSD will head off to the States to guest star on CBS’s “The Late Show with David Letterman” and ABC’s “Live! with Kelly.”

Jessica
Wild Romance
How does this article make you feel?