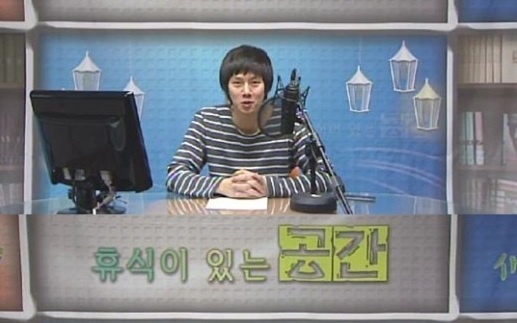 Despite serving in the army, Super Junior’s Heechul has been able to take his on-air talent to the radio.

According to the Sung Dong District Office, Heechul has recently joined the office’s Internet radio show as the main host. “Kim Heechul has been hosting our Web-based radio show, ‘Space for a Rest – Visible Radio,’ which is provided through our homepage. His first show aired on January 20,” a representative from the district office was quoted as saying by local media TV Report.

“Kim Heechul was in charge of our office’s PR and video filming/editing. But we’ve decided his talent would better-fit our radio DJ role,” it added.

Heechul’s show airs every Friday at noon (KST) for 50 minutes through the official webpage of Sung Dong district office. The show reads letters sent in by Sung Dong residents and talks about local news in general. Heechul was cast in this role after the original host was transferred to a new position.

“We already received an official letter of approval from the Military Manpower Administration for Heechul’s position. But we’re very concerned that some people may be upset with it,” the district office representative added. “Usually, our office employees listen to the show. But last week we saw record-high listeners, which resulted in a server crash. If the show gets really popular, we’re planning to keep Heechul for the duration of his service.”

After completion of his four week boot camp training last September, Heechul was assigned to the Sung Dong District Office as public service personnel. The reason he’s not serving the regular army, and instead working at the district office, is because of his 2006 car accident that resulted in a serious ankle injury. People with serious injuries are exempt from serving regular military camps and instead required to serve as public service personnel. In his current position, Heechul only works regular working hours and is allowed to spend his free time on his own.