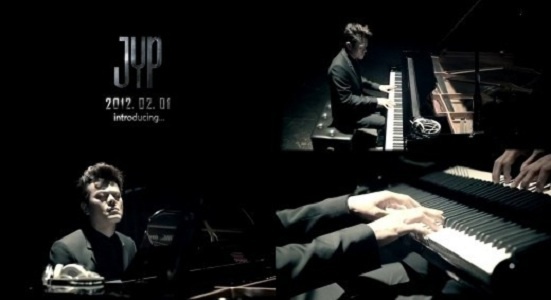 Park Jin Young, founder of JYP Entertainment, released a mysterious teaser video earlier today. In the video, he didn’t reveal anything except for the piano intro, and fans have been speculating what to make out of it. But a recent Twitter conversation between JYP and 2PM’s Wooyoung suggest 2PM’s new song might be in the works.

JYP first mentioned 2PM in his Tweet on January 18. He said, “I filmed ‘Five Million Dollar Man’ in Busan till this morning and moved to Seoul to record ‘K-Pop Star.’ I finished 2PM’s new song and also shot ‘Dream High.’ It feels like I’m dreaming after staying up 48 hours straight^^. But I’m so happy and thankful. To God and every one of you. I’m going to bed now~.”

In the Tweet with today’s teaser video, JYP said, “Which artist’s song do you think it is?” Shortly after, 2PM’s Wooyoung responded by saying, “Hyung~I think I know ^0^ kekeke.” JYP wrote back, “Be quiet…^^,” to which Wooyoung said, “Umhahaha^0^…Anyways hyung, don’t you have something you want to tell me too??? Kk.” JYP wrapped up their amusing conversation with, “One week later I will T.T Definitely~I will…” as Wooyoung answered, “Then I will get ready for it too!!! ^^.”

Netizens who saw the conversation commented, “The teaser for ‘Without U’ in 2010 also started with a soft piano sound. This time again?” “It looks like 2PM’s new song but it might be for ‘Dream High,’” and “It’s driving me crazy. Hurry up and let us know what it is, JYP!”

Is it going to be 2PM’s comeback song or an OST track for “Dream High 2”? Or could it be JYP’s own solo track? What do you think it is?

2PM
JYP
Park Jin Young
Wooyoung
How does this article make you feel?