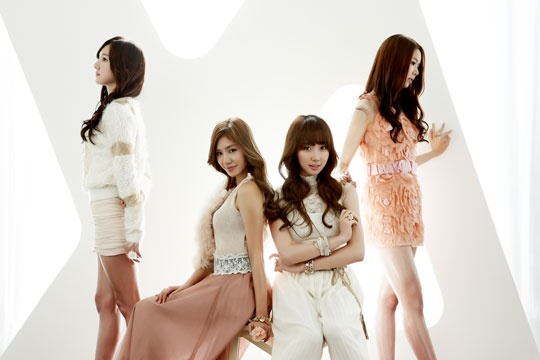 Stellar Switches Two Members and Will Comeback in February

Rookie girl group Stellar will switch two members and will comeback with a new look in February.

The original four members, Ga Young, Jun Yool, Jo Ah and Lee Seul debuted with their digital single, “Rocket Girl” last August. However, Jo Ah and Lee Seul will be leaving the group to form their own ballad group, Honey Dew. Information or names of the two new members joining Stellar have not been released yet. You can only catch a glimpse of their side profile in this new album jacket photo.

Stellar’s management said, “We will be revealing the two new members soon. Stellar will be showing a new image for their second single coming out in February. Please give them a lot of love.”

Stellar received a lot of attention last August, during their “Rocket Girl” promotions. One of the reasons was Shinhwa’s Eric stepping forth as their producer and even starring in their music video. Another reason was Ga Young’s fame as an “ulzzang” during her pre-debut years. Ga Young also showed her acting skills in the KBS drama, “Spy Myung Wol” and she was a reporter for “Entertainment Relay” as well.