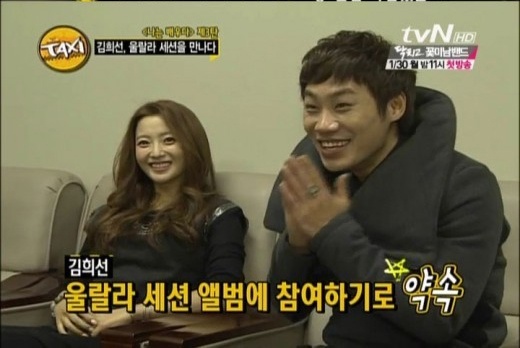 Actress Kim Hee Sun has shown that she is a fan of Ulala Session by promising to feature in their next album!

On January 26, Kim Hee Sun made an appearance on tvN‘s talk show, “Taxi,” and revealed that she was a fan of the band after attending the band’s “Top 11″ final concert with “Taxi” MC Lee Young Ja. She brought along with her a special gift of outfits picked out by herself personally, which the Ulala Session members couldn’t contain their surprise and excitement over.

“I met you briefly during the MAMAs, so it feels great to be so welcomed by people that I love so much,” Kim Hee Sun greeted.

The band responded, “We’re going straight into our album production, and we’re also planning to hold a concert around the same time as its release date. We’re thinking of late March or early April.”

Kim Hee Sun chimed in, “Can you include me, too? I have experience featuring for Mighty Mouth!”

In front of the camera, Ulala Session eagerly promised her a spot in their album with gleeful expressions. After all, it’s not every day that one of Korea’s most beautiful actresses wants to sing for your album!

Kim Hee Sun
Taxi
How does this article make you feel?