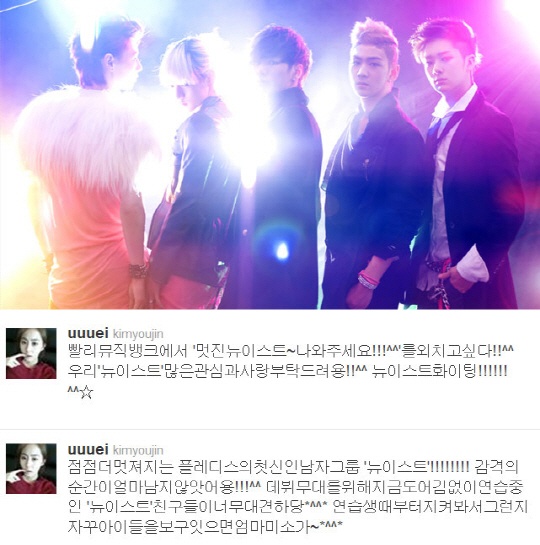 After School’s Uee Cheers on NU’EST

There’s no denying that NU’EST is an extra special group to After School. Pledis Entertainment has been known for being mainly focused on female celebrities like After School and Son Dambi, so as the label’s first ever boy group, NU’EST garnered considerable attention in that right alone.

From making sneaky appearances in music videos and joining After School on stage as back dancers, the label truly acted like a family in embracing the group’s upcoming debut.

Member Uee shared some more love for the boys on her Twitter on January 27th by writing, “Will our ‘amazing NU’EST~ hurry and come uot on Music Bank!!! ^^’ I want to shout that!! ^^ Please give a lot of love and attention to our NU’EST!!^^ NU’EST fighting!!!!!”

In another tweet, she wrote, “Pledis’ first male group NU’EST is getting more handsome by the day!!!!!! Their special moment isn’t too far off anymore!!!! ^^ I’m so proud of NU’EST, who are still practicing hard for their debut stage *^^* Maybe it’s because I’ve seen them since their trainee days, but whenever I see the boys, I can’t help but smile in a motherly way~ *^^*.”

NU’EST is a five member boy group made up of members JR, Baek Ho, Aron, Minhyun, and Len. Their debut is currently slated for early March.

NU'EST
After School
Pledis Entertainment
Uee
How does this article make you feel?