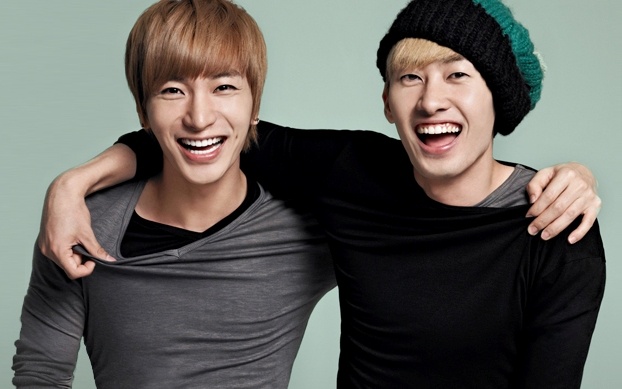 Suju’s Eunhyuk and Leeteuk Disappointed After Recent Airing of "WGM"

Super Junior’s Eunhyuk and Leeteuk recently expressed their disappointment after the airing of a broadcast.

Eunhyuk wrote a tweet to Leeteuk after the broadcast of the show in which he and the other members appeared as part of the “Fighting Juniors.” Eunhyuk wrote, “Be it a script or not, it seems like I can’t do variety shows from now on, hyung. What’s my point of being funny if I’ve become into a completely bad guy?”

Leeteuk tweeted back, “What do you mean the bad guy? You worked so hard! I couldn’t have survived without you. People said they watched it because of you~ Don’t worry about it. Your ad-libbing and sense of humor is the best! Who said you’re the bad guy? Bring them to me!”

Eunhyuk continued in response, “No, I really think I was the bad guy. But EunTeuk was the best! I get along with you the best, hyung.”

Leeteuk sent a message to the audience through his twitter, taking full responsibility on the matter. “If there are any problems, please ask me or just solely attack me. The cast did their best according to the situation, so please do not point out who was the good or bad person, and just enjoy the show. Thank you. My fault is the greatest.”

The tweets were centered on the recent episode of MBC’s “We Got Married,” which aired on January 28. Super Junior’s Donghae, Eunhyuk, Sungmin, and Kyuhyun appeared on the show, along with actresses Lee Sena, Shin So Yul, Son Eun Seo, and Jang Yeon Joo. This episode decided the final couples on the show.

Throughout most of the episode, Eunhyuk and Lee Sena constantly showed their affections for each other, even making it as a couple in the middle round. But on the final round, Eunhyuk eventually chose Son Eun Seo, who’d already become a couple with Donghae, earning him the name “bad guy.” This led to Lee Sena suddenly tearing up, briefly silencing the lively atmosphere of the show.

Eunhyuk’s transformation into a “bad guy” has gained much attention from viewers, and received some negative responses, causing a hot online debate.