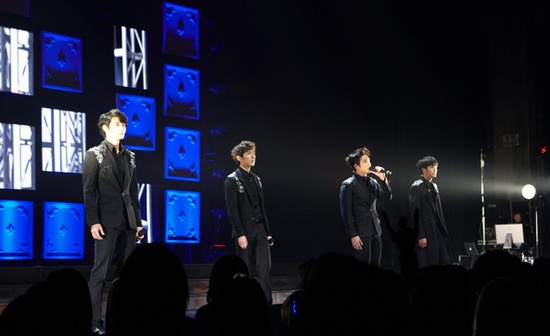 2AM Sells Out Their Bunkamura Orchard Hall Concert

2AM has completely captivated their Japanese fans with their stunning ballad songs!

Starting January 24, the four boys embarked on their “2AM 1st Japan Tour 2012,” which runs until Janury 29. For their Tokyo stop, the boys have decided to perform at the Bunkumura Orchard Hall, a prestigious concert hall that is akin to Korea’s “Arts Opera House.”

IU launched her debut showcase in the same concert hall so it’s no wonder why the equally talented men of 2AM would want to perform in it. 2AM is the first Korean idol group to perform at the hall.

To their fans, who completely filled the hall to the brim, 2AM shouted out,” This is the end of our first Japanese tour. Thank you for supporting us. Please give your love to the second single which will be released soon.”

2AM officially concluded their tour in Osaka on January 29. They’ll be returning to Korea on the 30th to prepare for their Korean comeback, which is scheduled for March.

2AM
Japan
How does this article make you feel?