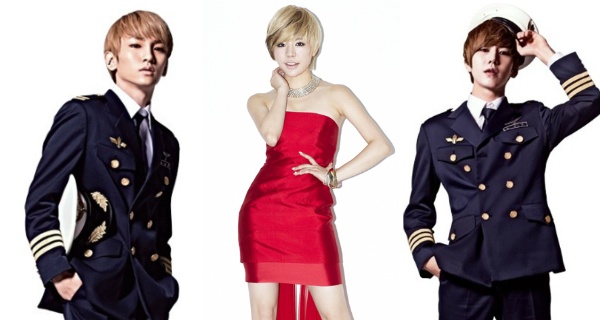 Super Junior Kyuhyun, SNSD Sunny and SHINee Key to Star in Musical "Catch Me if You Can"

Super Junior’s Kyuhyun, SNSD’s Sunny, SHINee’s Key, and CSJH The Grace’s Dana will be taking the stage in March for the Korean run of the Broadway musical “Catch Me if You Can.” The musical is an adaptation of the 2002 Hollywood film directed by Steven Spielberg which starred Tom Hanks and Leonardo Di Caprio.

Kyuhyun and Key will be alternating the role of Frank Abagnale, Jr, a real-life gifted con artist, who successfully wheedled millions of dollars while pretending to be an airline pilot, a doctor and a prosecutor. Leonardo Di Caprio was nominated for a Golden Globe for playing Frank Abagnale in the film.

Sunny, meanwhile will be playing Frank Abagnale’s love interest, Brenda Strong, originally played in the movie by Amy Adams. She will be alternating the role with Dana and theater actress Choi Woori.

The Broadway adaptation of “Catch Me if You Can” opened in April 2011. Its five-month run is distinguished with three Tony Award nominations, including for Best Musical and a Best Actor win for its lead actor.

“Catch Me if You Can,” starring some of Korea’s top idols, will open in Seoul on March 28 and will run until June.

SHINee
Super Junior
Catch Me If You Can
Key
Kyuhyun
Sunny
How does this article make you feel?