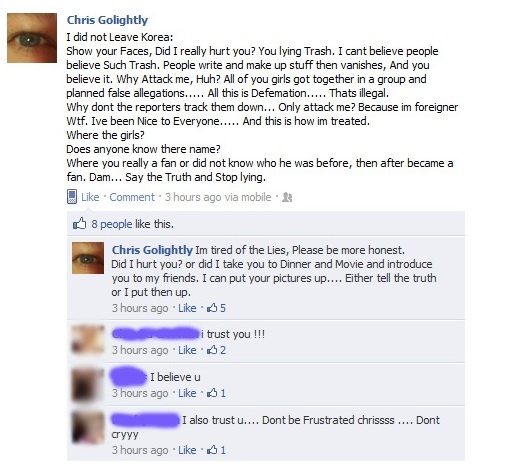 Earlier this week, we reported on “Superstar K3” contestant Chris Golightly flying back to the U.S. after being accused of rape allegations by more than 10 women from his fan club. At the time, he wrote on his Facebook, “I’m leaving to America today. Lies really hurt me. And I am very sad for people who make up stories. Goodbye Korea.”

But on February 3, Chris left another message on his Facebook indicating he hasn’t left the country yet, and that he will fight back against all accusations. This is what he wrote:

In response, Chris’s Korean representatives told local media, “We had no idea he was still in Korea. We think he has been mentally shocked by this whole incident.”

On January 28 one fan wrote on Chris fan club that, “Chris took me to his home the first day we met, and we had sexual relations.” Other fans also stated that they thought they were lovers but Chris demanded that they keep their relationship quiet. Another fan wrote, “What Chris needed wasn’t the invisible fan club that supported him, but just ‘women’ that would be around him. That’s why he repeatedly contacted the fans and brought them into his bed, while telling them, ‘I miss you, you’re pretty, you’re the only one, and we’re in a serious relationship.”

Chris Golightly made it to the Top 11 on the third season of Mnet’s popular audition program, “Superstar K3,” and the Top 24 on “American Idol Season 9.” He was reported to have left for the U.S. in order to take part in the U.S. audition show, “X-Factor.”

Whose side are you on?

Chris Golightly
Superstar K3
How does this article make you feel?