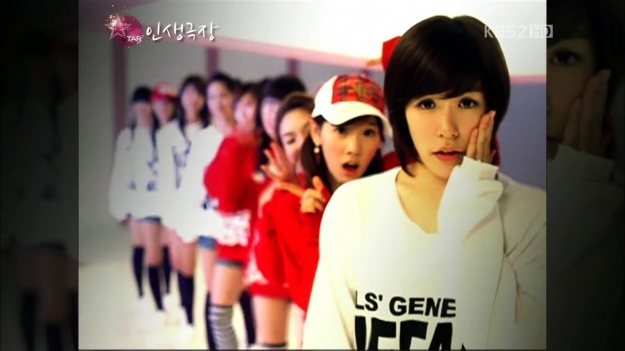 Random Musings: SNSD in the U.S., Kiss Scenes and Comebacks

You know I think what Soompi lacks at the moment is a random weekly article that summarises various news articles over the past week. Being the proactive writer that I am, I have decided to fill that little gap. So here is the first of what is hopefully a weekly series of articles, where I go through some of the more interesting articles of the week and offer my relatively mundane opinions. Whether I continue to do this in the future will depend on general interest and if I’m actually motivated enough to stop watching TV to do some productive writing. Anyway with that underway, let’s get started with our very first random musing weekly.

1) SNSD in the U.S.: How should they maintain this momentum?

SNSD has had a very busy week. They’ve started their push into the American market and have come out running in full sprint. We’ve seen them feature on the “David Letterman Show,” and the “Live! With Kelly” show and have had celebrities like Daniel Radcliffe and Simon Curtis mention SNSD in one form or another. I think it’s safe to say that SNSD has gotten off to a good start, certainly they seem to be having it a lot easier than the Wonder Girl’s did when they first entered into the market.

So a good first start then but, at the risk of sounding really cliché, their real work really does begin now. There was an interesting article on “The Atlantic” news site about the chances of K-pop gaining mainstream success in the U.S. They mentioned a few other singers in that article but let’s focus on SNSD for now. The gist of the article is that SNSD is going down the road of previous K-Pop singers like BoA that have failed to gain any appreciable foothold on the U.S. marketplace. Their argument stems from the fact that SNSD isn’t really well marketed in the U.S. The article was written before their appearances on U.S. TV, so it will be interesting to see if their opinions have changed since then.

So what do I think SNSD needs to gain foothold in this lucrative market? Further marketing pushes by SM is definitely a plus but we also need to re-think our music distribution systems as well. It’s true that a lot of people now purchase their music digitally on services like iTunes etc but there is still a large market around for physical CDs and it’s still much too difficult to purchase K-Pop CDs cheaply and readily. I saw mentions somewhere that Best Buy was stocking T-ara CDs on their online store, which is a good first step but we really do need these CDs available in more physical stores across the country.

Then there is the question of actual musical content within these CDs. I unfortunately don’t know enough about U.S. musical tastes to really say anything substantial but I do believe attempts like WG’s collaboration to produce “The DJ is Mine” is a good step forward, songs that are specifically catered to the marketplace rather than just localised songs like “Nobody” or even “The Boys.” I’m sure fans will continue to watch SNSD’s push into the U.S. market with great interest but at the same time, I do hope they won’t forget their home market as well in pursuit of greater treasures. It’s always been a shame that we don’t get to see the Wonder Girls being more active in the South Korean market, so hopefully SNSD will somehow try to balance their work load between the U.S and the Korean market.

Fun little article this one, mentioning various memorable kiss scenes from numerous dramas of years gone by. The mere fact that I actually remember watching the vast majority of those kiss scenes when they first aired probably either means I have a really good memory or that I spend way too much time watching dramas in my free time.

Whatever the case, kiss scenes are one of those standout moments in any drama. It’s the dream of fan-fic writers and one of the reasons we watch dramas. What’s that? Ha Ji Won and Hyun Bin in a new drama? Don’t care about plot, characterisation, setting etc, I just need my fill of fantasy romance. Actually I’m just over-exaggerating, an interesting kiss scene means nothing if the drama is about as interesting as watching a cat licks it’s paw for hours (Hmm…actually that might be interesting, probably is a youtube video of it somewhere). But a kiss scene really does help make a good drama even more memorable and that’s what our memorable kiss scene article really demonstrated.

3) Plenty of comebacks this week, the rise of the solo singers.

Plenty of interesting comebacks in the last week, we’ve seen the comeback of Se7en, FT Island, Miryo, Park Ji Yoon and John Park. It’s a great time to be involved in the K-pop music scene with the return of such of a formidable line-up of singers. Also do you see a pattern here? With most of the groups ending or close to ending their activities, we are seeing a lot of solo-singers making a comeback and I think that’s a good thing. Sure we have a fair share of solo singers last year as well but it was definitely overshadowed by a large majority of groups. Pretty much the only reliable place to listen to and watch solo singers was on shows like “I’m a Singer” and “Immortal Song 2.” I really do think it’s great to see so many solo-singers come out this early in the year and hopefully we’ll see a few more solo-singers come 1st on the weekly music shows.

4) MBC Strikes and you, why this affects overseas fans as well

As some may know, the staff members of the Korean Broadcaster MBC are currently on strike. Unfortunately trying to explain the reasons behind the strike is beyond the scope of this article. But the effects of these strikes can be felt by overseas fans as well, with the strikes forcing production to be stopped on numerous variety shows, including “We Got Married,” “Infinity Challenge,” etc.

Some may ask why other MBC programs like “Come to Play” or “Music Core” isn’t affected by these strikes. Technically they are but currently they are being produced by senior staff members that are not part of the labour union currently on strike. MBC had previously gone on strike in 2010 for 7 weeks, and while it’s impossible to say if the current strikes will last that long, the labour union is currently very motivated to keep striking till their demands are met, which stems from general distrust from upper management and perceived interference in their work by upper management for nefarious purposes.

So why am I mentioning this? Just in case people are curious about why certain variety shows aren’t airing at the moment and so that readers at least understand that there is a legitimate cause for these strikes, whether you agree with the reasoning or not. Hopefully the issue will be resolved satisfactorily by both parties and we will see our favourite MBC variety shows again.

5) The demise of popular sharing sites, how should we as a community move forward from here?

As some may have noticed (Let’s be honest, it’s pretty bloody hard to miss), the U.S. Government has been on a war path and has shut down Megaupload, causing a ripple effect that caused the shutdown of numerous file-sharing sites. As most of you may be aware, the vast quantity of Korean media files shared in the overseas internet community were done using these core set of sites. The shutdown of these sites has resulted in the loss of terabytes of Korean content. So what should we do?

Let’s first start off with some confessing. It’s reasonably true that the vast majority of K-pop, K-drama and K-variety fans download their share of content using these types of services, which no matter how you view it, is technically illegal in the vast majority of countries. So why have we been forced to use illegal service to get our share of Korean Content? The answer is quite simple yet far reaching. We haven’t really had a reasonable legal method of getting content. There are numerous ways of purchasing Korean Music online from the numerous Korean music download sites, but the most of them are extremely difficult to use for the a lot of the overseas fans due to language and technical barriers. Despite K-pop being an international business now, the method of purchasing K-pop music is still grounded in domestic methodologies, involving the use of Korean payment methods and requiring the usage of Korean Social Security Numbers/Citizenship numbers to apply for membership etc. It has improved in recent years with the introduction of K-pop in iTunes but it’s still not enough. However this is nothing compared to K-variety and K-drama, who have no choice but to download illegally since there is absolutely no legal avenue of content purchase for overseas fans.

MBC and SBS is trying to somewhat improve this situation with the introduction of their official Youtube channels, while KBS has been providing subtitled tv show content on their KBS World cable channel for a few years. While this is a good step in the right direction, it’s still not an ideal solution with Youtube content being split into annoying 5min sections in low quality while KBS World requires an expensive cable plan to use. There needs to be a way to easily acquire content legally at a reasonable price. All 3 broadcasters run a Video-On-Demand system on their Korean homepages that allows you to watch content for a low set fee online. A system similar to this is something that is also required overseas. Just imagine a Netflix-like service that allows you to pay a set-monthly fee that allows you to access Korean TV Show content overseas. We need a service that is fully backed by the major broadcasters and accessible from numerous countries. Of course before any of this is done, the issue of licensing and content pricing needs to be addressed, but once addressed I believe there is a reasonably sized market for the legal purchase of Korean TV show content internationally. Hopefully the broadcasters figure something out soon.

Comeback
David Letterman
MBC
Random Musing
How does this article make you feel?