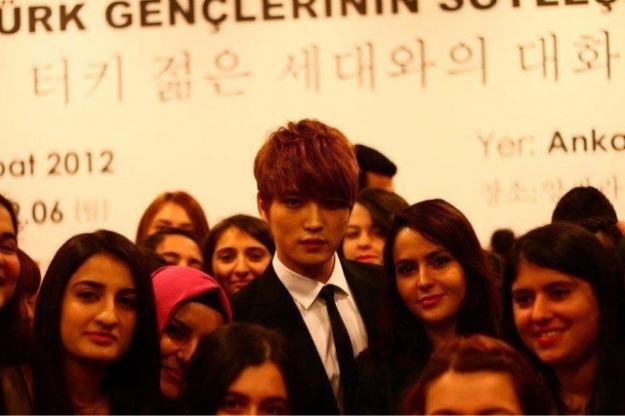 As reported earlier, JYJ’s Jaejoong held his first-ever fan meeting in Turkey on February 5. The following day, he appeared in a youth forum at Ankara University with South Korean President Lee Myung Bak, and was later invited to the Presidential Palace by Turkish President Abdullah Gul.

During the youth forum, Lee Myung Bak held a brief Q&A session with Ankara University students. One fan requested the president to help host a K-Pop concert in Turkey. “I would love to bring K-Pop artists here, but they’re just too busy. When K-Pop artists travel to Europe, I’ll try to convince them to stop by Turkey, too,” the South Korean president said.

He also talked about his story of visiting a school in France. “I met a French student who was fluent in Korean. So I asked her why she chose a Korean major. She said she took Korean in order to learn and understand K-Pop lyrics,” Lee Myung Bak said. “But she said she was disappointed because it’s still hard to understand the lyrics. I told her not to worry because I also have a hard time understanding it,” he added.

At the end, Lee Myung Bak closed his speech with an introduction to JYJ’s Jaejoong. “Before I leave, let me tell you something good. I invited K-Pop star Jaejoong,” the president said, as he jokingly added, “Since Jaejoong is here, I’ll have to get out of here.”

Here are some photos from the youth forum and the special dinner at the Turkish Presidential Palace.

Jaejoong
JYJ
lee myung bak
How does this article make you feel?