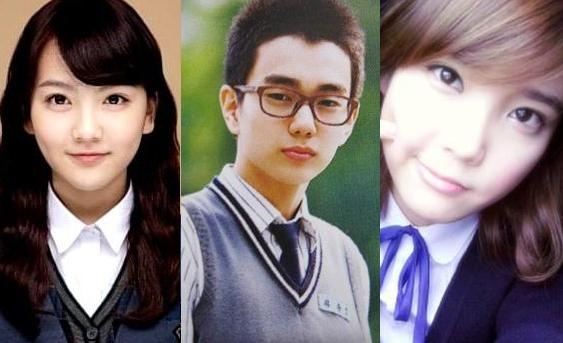 Idols to Graduate This Month

With the start of February, graduation time has arrived, especially that of young idols with ‘93 and early ‘94 birthdays. Along with congratulating the idols for their graduation from high school, fans are anticipating their various activities upon becoming an adult.

First to graduate was Chemi of rookie girl group C-Real. As a student of Chungnam High School, she attended her graduation ceremony on the afternoon of February 3.

Kang Ji Young, the maknae of Kara, will graduate on February 8. Currently attending Moohak Girls’ High School in Seoul, Ji Young doesn’t have any special plans for the day, and will attend the graduation ceremony along with her fellow classmates and teachers.

Several idols plan to graduate on the 9th, including IU. She is currently attending Dongduk Girls’ High School in Seoul. On whether or not she plans to attend her graduation, she revealed, “It really depends on the schedule, but I currently have plans to attend the ceremony.” Many people have shown interest in the graduation of the nation’s little sister.

However, Jiyeon will not be able to attend her graduation, due to her busy schedule. She will be in Paris on this day, for KBS’s “Music Bank in Paris” on February 8, along with the other T-ara members.

Luna is planning to attend her graduation ceremony according to the recording schedule of her drama. She is currently active as an actress in CSTV’s weekday drama, “Saving Mrs. Go Bong Shil.”

Double A’s Kimchi and Hoik will also attend their graduation ceremony at the Korean Art High School, and will receive their diplomas together.

On February 10, SHINee’s Taemin will have his graduation ceremony at Hanrim Art High School. However, due to “Music Bank in Paris,” he will not be able to attend it, unfortunately.

Twin sisters T-ara’s Hwayoung and Co-Ed’s Hyoyoung will each graduate at their schools on this day, Jeonam Girls’ High School and Soongil High School in Gwangju, respectively.

Sistar’s Dasom will also graduate on this day, from Anyang Arts High School. Sistar will be in Paris for “Music Bank,” therefore she will not be able to attend the graduation ceremony.