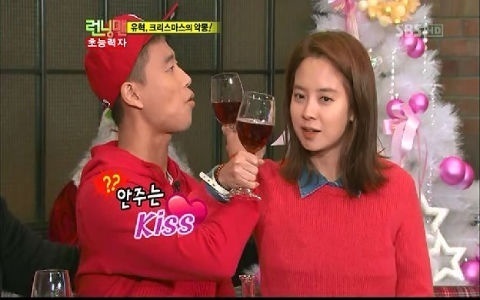 On yesterday’s episode of SBS’s “Running Man,” the cast and crew headed over to Incheon for a “Gary Knows Everything” special. Last December, Gary won the “2nd Running Man Best of the Best Competition,” getting a free trip to Europe. As soon as he returned to Korea, Gary was bombarded with questions from fellow members in order to acquire decisive hints for their latest “Running Man” mission.

What caught viewers’ eyes during the episode was Song Ji Hyo and Gary’s relationship. The two are well known as the Monday couple on the popular variety show because they would show interest in each other, especially on Mondays – the primary recording day for the show. With Song Ji Hyo going public with her relationship to C-Jes Entertainment CEO Baek Chang Joo, many fans expressed their concerns regarding the much-loved Monday couple.

During the most recent episode, the two were seen holding hands and acting like the same-old Monday couple to fans’ relief. However, it’s been revealed that the episode was recorded at the end of January, before Song Ji Hyo was caught on a date with Baek Chang Joo. Many fans are wondering how the dynamics of this Monday couple will change in the coming episodes.