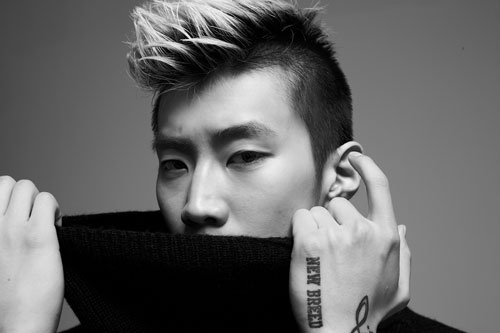 Solo artist Jay Park has made his comeback through the release of his first official album, “New Breed.”

On February 8, despite the cold weather, Jay Park openly revealed his excitement for his comeback, smiling throughout the whole interview.

His new album, “New Breed” contains songs of various genres, including electronic hip-hop and R&B. Many well-known musicians, both Korean and foreign, participated in the production of the album, including Rob Knox, the famous producer who’s worked with artists like Justin Timberlake, Rihanna, and Britney Spears.

“My first official album contains my everything.”

During the past three years since he first debuted as a solo artist, Jay Park has proved to be a powerful solo singer. “It’s been almost a year since my last comeback with the release of my mini album ‘Take a Deeper Look,’ last April.”

It’s not an exaggeration to say that Jay Park has put his everything into his first official album.

“I’ve put all my heart and soul into my first official album. During the past year, I composed about 30 songs and recorded 20 songs in all. Especially since I composed all the songs in the album except for two of them, it’s no wonder my affection for the album is special.”

Will Jay Park have any hit songs?

Regarding this question, the confident Jay Park responded with the suprising answer, “Maybe?”

“My songs can’t become hits here. The title song, “Know Your Name” was more popular with foreign fans than with Korean fans. My album ranked #1 on the iTunes R&B chart in the U.S., Canada, Australia, and Japan. The reason? I think it’s probably because my songs are more similar to American pop than K-Pop. I grew up listening to a lot of American pop, so my songs contain that part of me.”

Except for two songs, Jay Park participated in the composition of all the songs on the album. However, he modestly stated that he is still lacking to be recognized as a true musician.

“I’m not a musician, I’m just a singer-songwriter. I’m a singer and entertainer. I think I could be accepted as a singer-songwriter. But that doesn’t mean I don’t have any ambitions to be a musician. I even bought equipment for composing music. But I think instead of being average at several things at once, it’s better to work hard at one thing. I realized this through dancing, in the past.” (Laughs)

“Acting is another challenge for me.”

Jay Park made his first acting debut in the movie “Mr. Idol” last year. Although the movie wasn’t a big success, Jay Park’s appearnce caused some excitement from the fans.

“I think the movie was a good experience for me. Through this movie, I realized how hard acting is. (Laughs) When the next opportunity comes, I want to look over the role and scenario first, and try acting again.”

However, Jay Park emphasized that music is more enjoyable for him.

“Personally, music is more enjoyable for me. Maybe it’s because I’m not that good at acting. (Laughs) I kind of want to do a dance movie. If I get the chance to do a movie again, I want to focus one thing, whether it’s music or acting. I did ‘Mr. Idol’ while I was recording the album, and it was very stressful.”

Jay Park was the former leader and performing expert of 2PM. He has since been recognized as a solo artist, but Jay Park, the person is still unknown to the public. Therefore, he is sometimes misunderstood.

“I usually don’t like smiling. Specifically, I don’t like pretending to smile. But my fans seem to really like seeing pictures of me smiling. I might have been misunderstood because of this, but I hope people will come to like me the way I am.”

Then, what kind of person is the real Jay Park?

“I’m the type that doesn’t care about what people think. Oh, and I take good care of my friends. I really like dancing, and I think that take care of myself well. (Laughs) I hope this comeback will let me be in the spotlight for a while, and maybe the real Jay Park, the person, will be revealed.”

Lastly, Jay Park finished, “I got to learn a lot of things while working on my new album. I will try to actively participate in more activities from now on. I worked very hard on the choreography and performance, and will continue to work hard in the future. I will show you the real singer Jay Park, so please look forward to it.”

No longer the former leader of 2PM, Jay Park has returned to the music industry with his own special musical colors. We look forward to seeing his comeback!