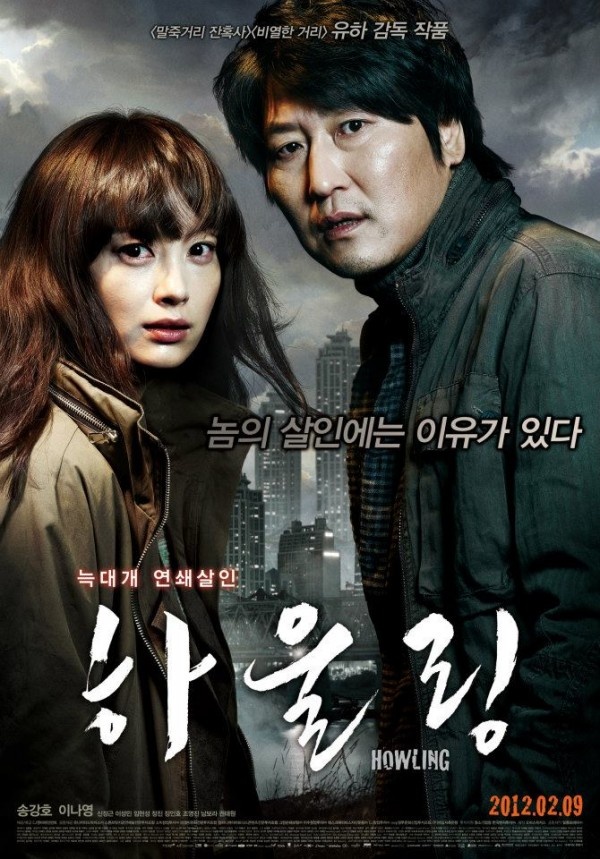 Yesterday, we reported about the movie premiere of the Korean movie “Howling.”

“Howling” was released today in Korea.

“Howling” is one of the most anticipated movie of 2012, starring popular actor Song Kang Ho (“Shiri,” “Sympathy for Mr Vengance,” “The Good, the Bad, the Weird,” “Thirst,” “The Host”) and actress Lee Na Young (“The Fugitive : Plan B.”)

The movies currently competing in Korean theaters are “Nameless Gangster” which is again comfortably enjoying its #1 spot with about 830,000 entries this week and has reached the 2.5 million spectators since its release. Movie “Dancing Queen” is still doing great despite the “Nameless Gangster’s” rise to the top this week with a total of 3.2 million entries. “Unbowed” makes it to the famed podium at third place.

Let’s go back to “Howling” shall we?

“Howling”‘ story is quite unique. The movie just made its entry in the box office and set itself apart with murder as its central plot. It is based on “The Hunter,”  the Japanese novel by Asa Nonami. It’s a cop-thriller directed by Yoo Ha who is known for “A Frozen Flower” and “A Dirty Carnival.”

What is it about?

Odd occurences happen as the police receives reports that a man immolated himself. Possibilities of it being a suicide are high.Veteran detective Sang Gil (Song Kang Ho) and new recruit Eun Young (Lee Na Young) take the case and start investigating. Detective Sang Gil who awaits an opportunity to be promoted think that a lighting device caused the immolation. Whereas newbie Eun Young noticed animal tooth marks on the body and wants to investigate further following this lead.

The investigation reveals that the cause of the immolation was a bite by a wolf dog. Days later, news of a murder involving an unknown kind of beast reach the crime unit. As the plot advances, the pair of detectives find out that there might be a connection between the first case and the latter. Eun Young will be the key to the resolution of the case.

Check out the trailer below and tell us your thoughts on the movie.