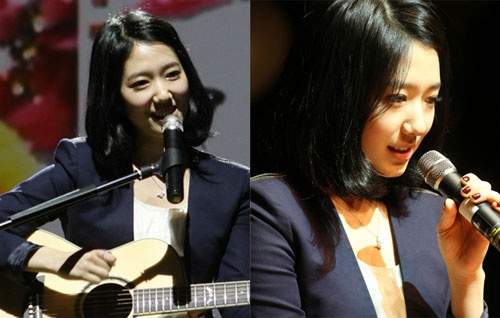 Actress Park Shin Hye surprised fans by dedicating a song to them at her birthday party fan meeting with official Korean fanclub, “Starlight Angel” on February 18. She wrote the lyrics of this particular song to express her feelings towards fans. She played the guitar and sang the song herself. Park Shin Hye’s sincerity expressed in the song touched many fans hearts.

An official from Park Shin Hye’s agency, 4HIM Entertainment, commented, “This song is very meaningful because it’s dedicated to Park Shin Hye’s fans and she wrote the lyrics herself. I’ve been watching her struggling to get the words out and practicing on her guitar until she got calluses on her fingertips. I’m happy that all of these struggles and practicing times have been paid off as the fans appreciated the song so much. Although the song doesn’t have a title for now, I think it is only right if the fans title the song themselves.”

The event lasted about two hours without a host, but Park Shin Hye proved to be a multi-talented entertainer as she efficiently hosted the meeting, lead the conversation with her fans freely and participated in games. She also sang “Lovely Day” and had an opportunity to re-enact scenes from “You’re Beautiful” and “Heartstrings” with fans. Moreover, fans got a chance communicate with Park Shin Hye in various ways, such as asking a series of 5-letter questions.

Many fans from overseas like Thailand and Japan also attended this fan meeting/birthday party. Park Shin Hye sent off her fans by sharing warm handshakes with each and every fan. Park Shin Hye and Starlight Angel agreed to donate profits made from this fan meeting to a Non-Profit Organization “Food for the Hungry” to sponsor “Starlight Angel” village in Ghana, Africa, where she visited previously as a service volunteer.

Park Shin Hye
Heartstrings
How does this article make you feel?