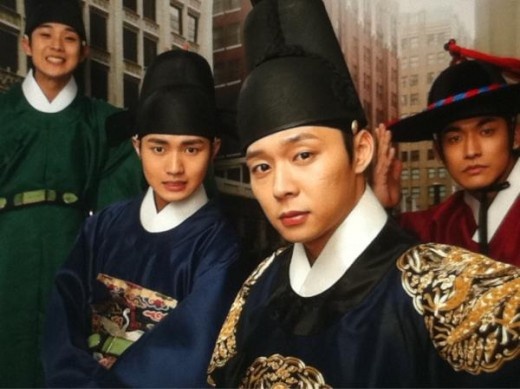 Cast of Upcoming Drama "Rooftop Prince" Takes a Selca Together

On February 18, Lee Min Ho revealed the selca through his twitter, tweeting, “Your Majesty, is this what you call a selca?”

In the photo are the four leading men of the drama: Park Yoochun, Lee Min Ho, Jung Seok Won, and Choi Woo Shik. They are wearing their Joseon-era attire for their characters’ roles, with comical expressions on their faces.

Park Yoochun especially gained attention for the serious look on his face, similar to that of a real prince. He tweeted back, “Tell Yong Sool (Jung Seok Won) to smile more. Chi San (Choi Woo Shik) is still smiling like that even though we haven’t found a way to get back to the Joseon era.”

Viewers that saw the photo commented, “Who knew such a handsome prince would be on the rooftop?” “Your Majesty, do you know of the word ulzzang?” and “They look very friendly with each other. This is a great combination [of actors].”

SBS TV’s upcoming drama, “Rooftop Prince” is set to premiere on March 14 at 21:55 KST. The storyline is centered on a Joseon-era prince (Park Yoochun) who jumps 300 years into the future (our present), where he meets a woman who looks just like his lost princess. It will be replacing “Take Care of Us, Captain” in the Wednesday-Thursday slot. The drama held its first filming on February 15.

Lee Min Ho (1993)
Rooftop Prince
How does this article make you feel?