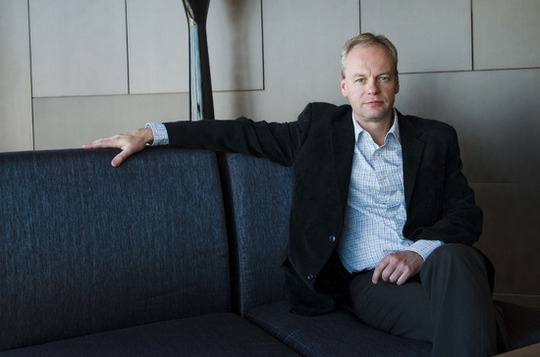 Live Nation: "Big Bang Is the Most Suitable to Become Global Artist"

Coupled with Live Nation, does Big Bang have the key to be the first K-Pop group to breakthrough worldwide?

Global concert agency Live Nation’s general manager in charge of Asia, Mats Brandt, expressed his great expectations for Big Bang’s upcoming World Tour. He recently visited Korea on business and met with OSEN at in Seoul where he discussed BIGBANG. “We will handle BIGBANG’s World Tour the same way we would Lady Gaga‘s,” he said.

BIGBANG’s World Tour, “BIGBANG Alive Tour 2012” will kick-off in the beginning of March and will travel to sixteen countries. YG Entertainment has teamed up with Live Nation to bring the group to the world. This marks the first time that the entertainment company will directly organize a world tour.

“It was in our office four years ago, when I first was introduced to K-Pop. I came to Korea for the first time to investigate the market, during which we realized the potential of South Korean artists. We were skeptical about it as we continued to watch the market for three years. It wasn’t until last year that our confidence in the genre began to grow at a very quick pace. Information is shared throughout the Live Nation global branches and the news on K-Pop drastically increased. We have confirmed the growth potential of K-Pop and of all the artists we have decided to focus on the talents of BIGBANG. BIGBANG has the talent, thus they have the best chance at becoming a global artist. I came to Korea a year ago, and since have started regularly visiting once a month.”

Of all the acts out there what made you choose BIGBANG?

“BIGBANG was the group that we saw as having the greatest ability to not only do a show once or twice, but would be able to sustain an entire world tour across the globe. Their talents as a group were very impressive thus they were judged as the best artists to become the next global star. Soon after we conversed with YG, during which our discussions went well.”

When could the World Tour be viewed as successful?

“First, the reaction of the audience must be good. Whether the audience is made up of a few people, the most important thing is the audience’s satisfaction than just mere numbers. The second important aspect is the review from the industry. Together with YG, we are staging a production, in which the performance is not the only important piece. It would be ideal if together we set a new standard in the global industry.”

What part are you concentrating on the most?

“Live Nation and YG have come together to form a team. The world’s top concert agency and South Korea’s best entertainment company have teamed up to achieve perfect synergy; it is quite inspiring to say the least. Performance production in South Korea is quite tight and the cost is on the expensive side, which is all well and good. Of course it would be better if the method was more international and systematic.

Live Nation views BIGBANG on a global scale like Lady Gaga, and our intent is to apply the same process used in the tour that we would use for Lady Gaga. It is not that YG hasn’t made attempts at going global, we want to work with YG’s existing capabilities and assist them in expanding on a more global level. We will also pay close attention to marketing. Together we will work on stage aspects, as well as business tactics to create a world-class production. This process will aid in making BIGBANG an even stronger artist.”

The list of staff is pretty impressive. For instance director in charge of Lady Gaga’s World Tour, Laurieann Gibson, is on board. How did you compile such a list?

“The creative team along with the administration listened to Big Bang’s music a great deal and then conducted several meetings. During our discussions we compiled a list of our top three or four choices; we then delivered our list to YG and consulted with him. Already the director had met with Big Bang, during which they had comfortably talked about the production. That is how we were able to make the list.”

Korean artists are constantly discussing advancement into the foreign market. However, they face difficulties. What is your advice to them?

“I believe it is really impressive that the South Korean agencies have succeeded in bringing the world’s attention to Korean music. This perhaps is general advice, but if you want to succeed globally you should not focus your energies strictly on Korea or Japan. Go out there and understand the situation in other markets. Live Nation appoints each branch to understand the local culture. It is good to focus on the locals who are especially good at what they do.

It is time for Korean artists to set their sights higher and not be satisfied with their current successes. It may seem far off at first but they can always take the step to reach the next level.”

Big Bang
Live Nation
How does this article make you feel?