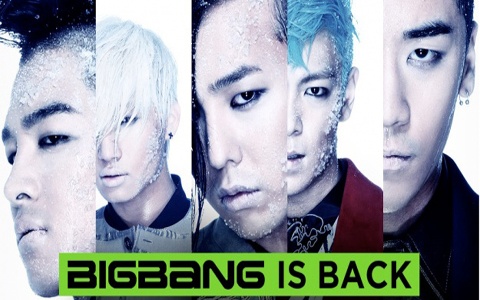 With the release of BIGBANG’s fifth mini-album a week away, YG Entertainment has announced that it will unveil one of its title tracks, “BLUE,” tonight at midnight. It’s been six years since BIGBANG debuted; and over the years, the group received tremendous love and support for their distinctive music style, as well as fashion sense. 2011 was a tough year for BIGBANG, but the hardships they faced last year only strengthened them as a team.

While working on their fifth mini-album, the members sought to create songs that will touch their listeners’ hearts. Through “Blue,” the members sought to express their story as honestly as possible. According to YG Entertainment, there is also a special reason as to why BIGBANG decided to release “BLUE” before the other tracks.

TOP dyed his hair blue, while Daesung went blond. Throughout their promotions, the members will continue to develop drastic changes to their style – performance, fashion, and more.

The release of “Blue” will be a taste of what BIGBANG’s fifth mini-album has to offer its fans. The fifth mini album “Alive” will be released on February 29, and BIGBANG will kick off their “BIGBANG ALIVE TOUR 2012” at the Olympic Gymnastics Stadium in Seoul March 2-4. BIGBANG will tour 16 countries and 25 cities in Asia, North America, South America, and Europe.

Stay tuned to Soompi for more updates regarding BIGBANG’s comeback!