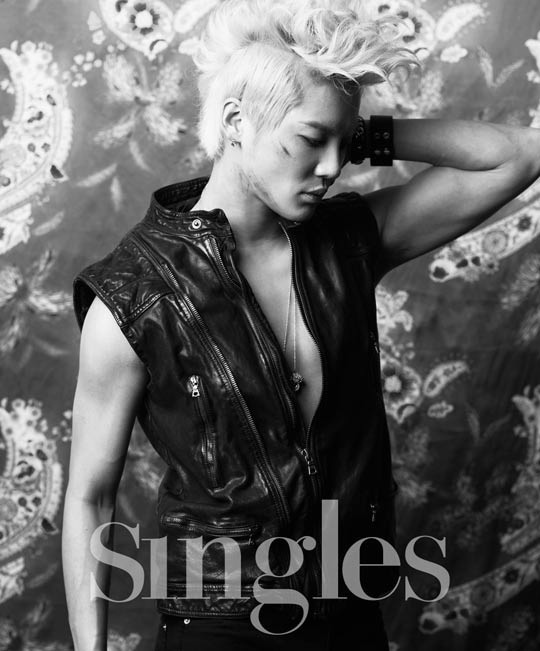 JYJ’s Junsu attempted a striking makeover for the March issue of the Singles Magazine. The 25-year old singer/actor donned the blonde look with dark, heavy makeup to create a more mature and powerful image. The leather jacket and ripped jeans even give out a funky aura we’re not used to seeing from the sweet boy group member.

During the photoshoot, Junsu also answered from interesting questions from Singles Magazine. Here are some of the Q&A’s from the interview:

Q: You must have been happy when you first got the offer.

A: Actually, I hesitated a lot. Because the word “Death” comes with a lot of pressure. “Shouldn’t I be more charismatic? Am I too young to express this character?” Of course, I knew it was the best musical and a good role, but I first had to think if it would fit my personality. There’s a clear difference between what I can do and what I want to do. But on the other hand, I realized no one would be able to clearly define this “Death” role. “Death” could be an old man, a little kid, a sexy young man, or a fat guy. So, I wanted to express the “Death” character as close to myself as possible. After it started, I felt like this would make me take a step up as a musical actor, following my roles in “Mozart” and “Tears of Heaven.”

Q: There’s a lot of people who want to become a singer watching you. Do you have anything to tell them?

A: Do not become an idol? Korea’s idol industry is…haha.

Q: How did you feel meeting your overseas fans?

A: First of all, I was shocked. I was surprised when we had our first showcase in the U.S. but to see people in places we’ve never been to, such as Canada, Spain, Germany, sing along our songs, it was so exciting and unbelievable. Sometimes I think about giving up and just stopping everything, but they give me a lot of strength.

Q: A lot of celebrities openly date these days. Wouldn’t it be possible for your guys?

A: I think it’s possible. Honestly, I’m 27 years old – wouldn’t it be weird not to date someone? It’s not like I’m weird or have a disease. But the fans tell me, “It’s OK to date someone, but just make sure you don’t get caught.” I know what that means, because there’s a big difference between seeing and not seeing.

You can see the rest of interview in the March issue of Singles Magazine. Enjoy the photos below!