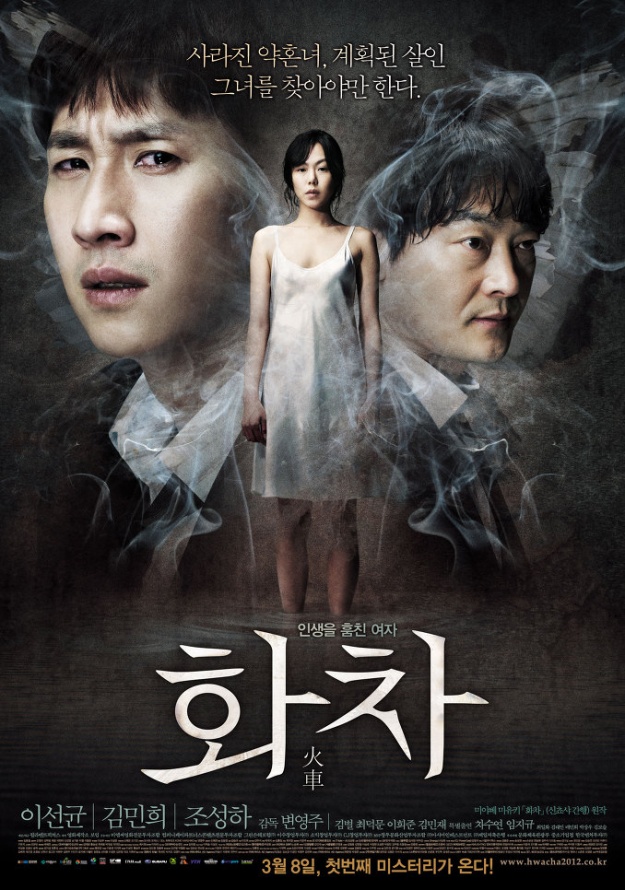 “Helpless” is a mystery film, based on a popular Japanese novel by Miyuki Miyabe. The story is about a man, who loses his fiance after one phone call, and a detective who tries to solve this case of the missing fiance, only to discover that everything about her was fake. The movie will open in theaters on March 8.

Yoon Kye Sang keeps it simple in a white shirt and black jeans under a long navy peacoat and a thick gray scarf.

Yoo Hae Jin sure looks excited to watch this movie! He’s dressed in a warm cable-knit sweater, a gray scarf and a gray hat – not much for colors, is he?

Uhm Hyun Kyung appears on the scene in a multi-color sweater with a peach-colored blouse inside. Her cropped jeans and suede shoes make her look extremely lengthy.

Tim shoots a smouldering look to the camera with slicked back hair, a gray blazer and black pants tucked into some shiny boots.

The adorable child actor Mason Moon is sure growing up fast in a dashing tuxedo with a checkered bow tie and fedora.

Lee Yoon Ji is all ready for spring! Her peachy pink blazer over a spring-like top with khaki green cropped shorts makes her look like a radiant spring lady.

The leading man of the film, Lee Sun Kyun! He’s dressed rather shabby though in a dark gray/green/brown coat and a plain gray t-shirt.

Kim Seung Hyun looks casual and suave in a hoodie under a leather jacket and a pair of shades.

Kim Ock Bin shows off her boyish femininity in her short bob. She spices up her outfit with a tropical print scarf and those killer booties.

Kim Nam Jin brings out his model side with a very modelesque pose – he sports a gray blazer jacket, cropped khakis and brown leather shoes.

The main lady of the film, Kim Min Hee! The outfit to the very left is what she wore to the press conference earlier in the day. Her beige toned dress was highlighted by her red suede mary jane wedges for a refined yet bold look. But come night time, she transformed into a sexy city-girl in a midnight blue mini-dress with a low-cut back and black and gold heels.

Actress Kim Hye Jin smirks at the cameras in an all-black ensemble.

Jang Woo Hyuk is a stylish guy! His cropped sweater over a crisp, white shirt and his studded kicks scream fierce.

Cha Yae Ryun captivates the cameras with her royal blue skirt and her black combat boots.

The cast of “Helpless” waves and wishes everyone a good time!