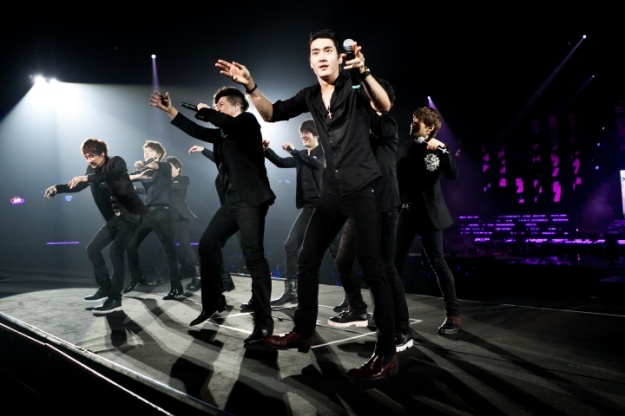 Watching Super Junior‘s world tour “Super Show 4” last weekend was so much fun that up till now, I’m still relishing every moment of it! Having watched “Super Show 3” last year, expectation for another great Super Show was pretty high and worries were indeed unfounded as the 9-men strong team brought the house down, yet again.

Boasting a production value of SGD 2 million doesn’t guarantee a show well-worth the ticket price if not for the great efforts by the boys and the 11,000 supporting fans over the two-day sold out concerts. I was very fortunate to have watched both days of the show — friends from the media were invited to cover the second show.

Super Junior opened the show with “Superman”, “Opera”, “A Man in Love” and “Bonamana” before taking a moment to greet ELFs for the first time and leader Lee Teuk asked in mandarin “Are you guys happy?” The set continued with “You’re my Endless Love” that they dedicated to fans. f(x) members Sulli and Amber made a special appearance during “Oops” in which there was a heartwarming tribute for Heechul who is currently in military service. Siwon also playfully stole a kiss from Eunhyuk. The boys went on to charm fans with “Wonder Boy” and “Rokkugo” before exiting the stage.

They soon returned with “Walkin'” which I really liked — walking on treadmills, riding bicycles in the air and Shindong in the aeroplane costume is nothing but pure cuteness which reminds me of a baby in a romper.

Henry of the sub-unit Super Junior M kicked off the solo stages with a medley of “Off My Mind”, “Lazy Song” and “Lighters”, fully displaying his talents in playing the guitar, keyboard and violin. On the first night, “Billionaire” was performed instead of “Off My Mind.”

Next up was Eunhyuk performing “Self Luminous Bejeweled Handsome Guy”. When he asked fans what is his name during the first show, fans screamed his real name “Lee Hyukjae”. I wasn’t sure if he would had preferred them shouting “Eunhyuk” instead, he gave up after several attempts. But on the second night, Eunhyuk said he is Tom Cruise, Johnny Depp, Brad Pitt, and Choi Siwon, and even asked if fans “got it?”. The answer was hilarious! All the fans shouted “No!” back at him.

Sungmin brings up the heat as he showed off a smooth sexy dance with a female dancer. Everytime his hands land on the dancer’s body the fans screamed their lungs out.

Kyuhyun‘s solo stage is one of my favorite. As one of the top three vocalists in the group and one who couldn’t speak English well, I find it rather impressive when he performed “Isn’t She Lovely” by Stevie Wonder, complete with harmonica and a pair of shade as well.

It caught me by surprise as Ryeowook who really come across as an introvert, teased fans by pulling up this shirt to let the female dancer touch him while singing “Moves Like a Jagger”. Ryeowook owned the stage with swift dance steps but I personally prefer a ballad song from him instead.

I had long forgotten about Kenny G if not for Lee Teuk’s beautiful saxophone rendition of “Loving You”. The leader went on to charm fans with Chopin’s Étude Op. 10, No. 5 (Black Key Etude). In the midst of singing “She”, the leader boarded a cart and started handing out roses to the fans. Guess what? I received a stalk too, but I wasn’t the lucky fan who was picked to be serenaded and hugged by Lee Teuk at the end of his cart-ride.

The funniest has to be Shindong’s cross-dressing segment for “Trouble Maker” and “Bubble Pop!” Fans screamed loudly as he makes a costume change behind a screen, showing only a sexy shadow. The playing of laser beams were also very well executed.

A hilarious video was shown, introducing the regrouped members of SJ Band in cosplay for “Good Friends” and “Pyjama Party” – Donghae dressed up as Charlie Chaplin, Eunhyuk became a white bird, Kyuhyun was transfomed into Steve Jobs, Lee Teuk turned into Hulk Hogan, Ryeowook became Gollum, Shindong as Britney Spears, Siwon as Superman, Sungmin as Marilyn Monroe, Yesung as Chucky. Their funny costumes and convincing mannerism tickled us so much we couldn’t stop laughing! On the second night, a young girl seated two rows before me was hit on the nose by the apple Steve Job Kyu threw out… hope she didn’t get a bruise after the show! I have to mention that Superman Siwon was sighted purposely tugging his red underwear several times….

The group also performed “Feels Good”, “Perfection”, “A-Cha”, “Mr Simple” and “Don’t Don” before Zhou Mi of Super Junior M continued with the second portion of solo stages, performing “Because of You.” Some audience were seen leaving their seats for washroom breaks and triggered questions whether they knew he is also part of Super Junior.

The next solo stage was shared by Siwon and Pastor Johnny Lee of 3rd Wave Ministry singing a gospel song “Your Grace is Enough.” Yesung chose to cover Kim Jong Kook‘s One Man which drew a lukewarm response and many fans weren’t familiar with the song but nonetheless waved their lightsticks to the melody. Donghae performed “This is Love” from the OST of “Skip Beat”, followed by “Oppa Oppa” together with Eunhyuk.

There was a fan event when K.R.Y. (namely Kyuhyun, Ryeowook, Yesung), Donghae and Siwon performed “Storm.” White lights from cellphones fill the stadium as white paper flakes fill the air. It was a beautiful sight to behold. During the talk time, Lee Teuk said the white lights are like beautiful stars, but the fans are even more beautiful than the stars.

In the “looking for girlfriend” segment, Sungmin was turned down on the first night when the fan he picked wanted to be Kyuhyun’s girlfriend instead. Not giving up, he asked for another chance on the second night but it was Lee Teuk’s turn to look for his girlfriend. A Japanese fan by the name of Yuri was selected and oh boy is she lucky! Lee Teuk suggested that they do the classic moment à la the late Andre Kim’s wedding show. It sent the fans into a frenzy as they enacted the foreheads touching moment.

Next set of songs included “You & I”, “Lovely Day” and “Our Love” which made Lee Teuk cry. Fan chants fill all corners of the venue as the sea of sapphire blue transformed into a sea of red hearts. The atmosphere quickly changed from heartwarming to delirious joy as the boys returned with “Do Re Mi”, Siwon as the Captain von Trapp and Shindong as Maria. It is heartening to watch them having fun on stage too while putting up a performance for fans. Captain Siwon had to carry a heavy Maria as the latter leaped into his embrace.

On the first night during “White Christmas”, my focus was on Kyuhyun as he was nearer to my section. All of the boys were using white frost spray cans to create the christmasy effect. Kyuhyun was spraying it into the air and letting the frost land on his head while he enjoys that very moment putting a very retarded expression that made him hilarious to watch. The group disappeared from stage after “Dancing Out”, the closing song for the show. As we all already know, nothing really ends without an encore.

The group returned with “Sorry Sorry” and “Miracle” for their encore stage before every member take turns to say their goodbyes.

Eunhyuk said “It’s sad we can only do this for two days. For Super Show 5, how many days shall we do it? Five? Ten?” and the fans cheered at his proposal.

Kyuhyun said “I’m worried that those on the side couldn’t see us clearly. Tried our best to go to all corners, the next time we will open all sides (of the stage) so you can see us closer.”

Siwon said “Today was a great day, I want to hug everyone. We always give our best cause ELFs are the best!”

Sungmin said “We are flying back to Korea immediately. Don’t want to go back, I want to stay here. Everyone here made this performance possible. As long as you keep supporting us, we will be there for you.”

Yesung said “Am so grateful for the opportunity to sing and perform. Thank you for loving and supporting us, we will always try to put our best performance for you.”

Shindong said “They have said all I wanted to say. I’m enjoying myself.”

Donghae said “Today was awesome, sorry to tell you this, I’d locked all the doors and you are trapped inside here. You have to stay overnight here. Stay with us tonight. We will put up better performance next time.”

Lee Teuk said “The fans followed us on our world tour to Korea, Taiwan, Japan… I’m watching all of you. Apa kabar (“How are you?” in Bahasa Malaysia and Indonesia). We hope this moment last in your heart. This is not just a moment but always.

The last song for the night was “Destiny” but the concert did not come to an official end until all the boys, except for Ryeowook, got themselves wet in a water game. That was four hours of energy and fun-packed performance!