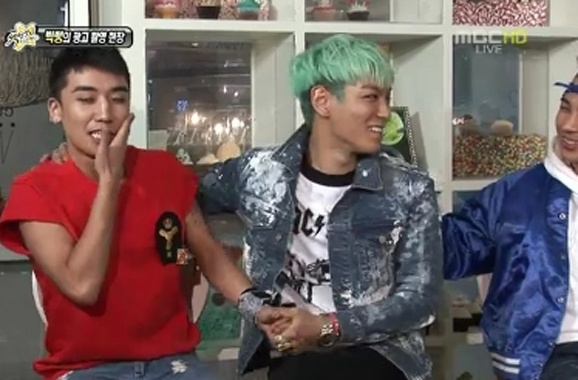 BIGBANG’s Seungri Has Talent for Getting Slapped, Wanted to Take Off His Pants for Teaser

On the February 26 episode of MBC “Section TV Entertainment Relay,” T.O.P drew laughter after slapping Seungri on the face.

Seungri who recently made an appearance on MBC “Light and Shadow” boasted, “I have a talent for getting slapped. My cheeks are firm so the sound of the slap can be heard much better.” Member T.O.P jumped at the opportunity to hit Seungri on the cheek as a special preview. (@4:15)

Seungri then told the production “You have to air this!”

During the interview BIGBANG were also asked to define the year 2009 in a word. Taeyang chose the word “Tiring” to define it. His answer immediately drew laughter in the studio. He explained, “It was the case. 2009 was a busy year for us. Since we were really doing well with our promotions, we had a lot of schedules and performances to attend. We even tried to escape back then.”

When Seungri revealed his concept picture for “Alive,” Taeyang joked around saying, “It’s because he couldn’t show the lower area.” Seungri actually wanted to take off his pants? He commented, “I’ve been wanting to ask him for it and President Yang Hyun Suk said to me, ‘Don’t do it.'” Click on the Image2play icon to watch a 1 minute clip of the show or watch the full video below.