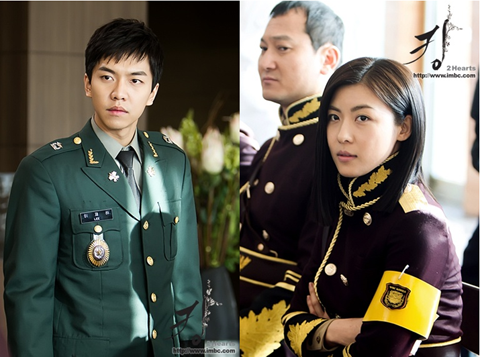 The teaser stills are from the first episode of “King 2hearts,” where Lee Jae Ha and Kim Hang Ah meet for the first tine. The scene was shot on February 7, and the two leads are dressed in their respective country’s military uniform. According to producers, Ha Ji Won has delved 100% into her character, talking and acting like a true North Korean operative.

A representative of Kim Jong Hak Productions stated, “While it was their [Lee Seung Gi and Ha Ji Won] first shoot together, they had great chemistry with each other, earning praises from director Lee Jae Gyu and the rest of the crew.

“King 2hearts” is about an arranged marriage between North Korean Special Forces female operative Kim Hang Ah and South Korea’s Crown Prince Lee Jae Ha. Initially, the two are blinded by their pride and prejudice against each other, but they manage to get past their differences and fall in love.

Lee Seung Gi
Ha Ji Won
My Girlfriend is a Gumiho
The King
How does this article make you feel?