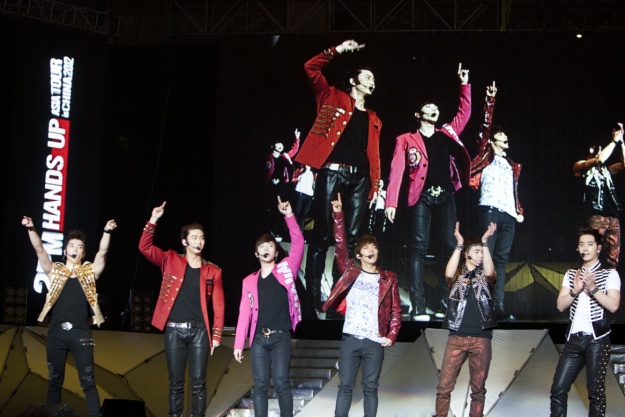 2PM has captivated the hearts of Chinese fans with a successful concert in the city of Nanjing. On February 25, the “animal-idol” group held its first concert in Nanjing in front of more than 9,000 fans. The concert was part of 2PM’s first Asian concert tour, “Hands Up Asia Tour,” which covers Taipei, Jakarta, Singapore, Bangkok, Nanjing and Hong Kong.

“Local people waited for 2PM’s concert for a long time. It was a chance to feel the passion of Chinese fans,” a concert organizer said. In fact, 2PM was ranked as high as #2 on China’s Weibo real-time keyword search items, while they attracted groups of Chinese fans wherever they went.

Meanwhile, 2PM donated part of the proceeds from its Nanjing concert to help support the disadvantaged kids in China. Their donations will be spent on improving the school facilities for over 200 students. This move is an extension of 2PM’s donation from last week when they donated some of their proceeds from their Thai concert to the Red Cross to support the recent flood victims.

“We are truly thankful for all the love our fans in Asia has shown us during 2PM’s first-ever Asia Tour. After meeting and interacting with the Nanjing fans, the 2PM members are still excited and are missing their fans. We’ll continue to work hard for the final Hong Kong concert as well,” JYP Entertainment said.