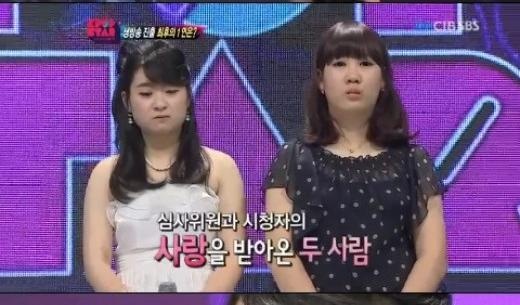 What exactly does it mean to have “potential” when it comes to recent audition programs?

On the episode of “K-Pop Star” that aired on February 26, the last battle to proceed to the live broadcast round took place. All of the contestants who fell under second place had one last chance to become part of the top ten.

Two contestants were especially drawing much attention: Son Mi Jin, who has textbook vocalization and Park Ji Min, who is called the “queen of rhythm.” Judges had to choose only one person from these two contestants and eventually, Park Ji Min was chosen. Son Mi Jin shed hot tears as she delivered her last thoughts and statements, creating a teary atmosphere for the judges and the viewers.

Park Ji Min, who was always considered a strong candidate to be the winner of the entire show, was surprisingly placed in the 2nd place survival round. BoA stated, “Even Park Ji Min probably didn’t imagine that she would be in this current situation. I think she struggled because of that. However, she still had her basic skills so I viewed her performance well.”

Park Jin Young stated, “Son Mi Jin passed through each level by level very well. And I liked that she showed us a new attempt,” as he praised her for her last performance. On the other hand, Park Jin Young said to Park Ji Min, “I don’t know if it’s because you are still young but when situations become pressing, you keep going toward a negative way. Since you’re heart is pressed, you keep going back to the techniques and tones that you think you are the best at.” Park Jin Young continued, “It was a very difficult decision today but we had to bring it down to who had more potential to grow. Today, Park Ji Min showed a higher potential.”

Son Mi Jin’s last performance was “Don’t You Worry About A Thing” by Incognito. It was a difficult song with many upbeats and half-key notes but Son Mi Jin executed it perfectly and received high praise. However, she was not able to move on to the next round. Instead, judges chose Park Ji Min, who showed high levels of nervousness.

Therefore, the judges’ standards have been questioned in terms of fairness and accuracy. Before these battle auditions began, Park Jin Young stated, “No matter how good you were in the past, we will solely be looking at today’s performance. Whoever is good today will be chosen. Whoever is not good today will be eliminated.”

Viewers proclaimed, “Park Ji Min was good but Son Mi Jin had just as much potential,” “I think Son Mi Jin did far better than Park Ji Min today so I don’t understand,” “If the judges followed what they said about only looking at today’s performances, Son Mi Jin should have been chosen,” and others.

On the contrary, other viewers exclaimed, “It’s too hard to judge contestants with just one performance,” “If you think about the past potential and singing skills, Park Ji Min would have no problem going into the live broadcast round,” “Park Ji Min showed just as good of a performance as Son Mi Jin,” and more.

Here is the performance of “Don’t You Worry About A Thing” by Son Mi Jin: