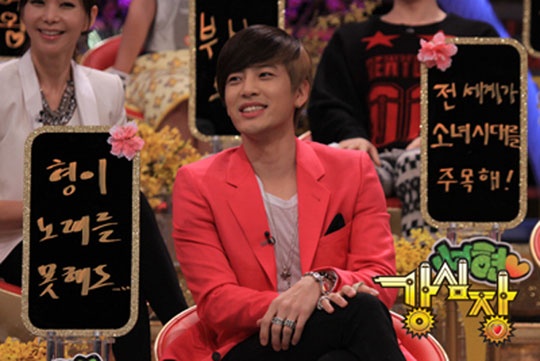 On SBS “Strong Heart” Se7en revealed more on how he received the song “When I Can’t Sing” from JYP. The interesting collaboration between JYP and Se7en gained a lot of attention and Soompi.com reported frequently about it.

So what do we know so far?

Back in January 29, 2012 we reported that Se7en, JYP, and YG had dinner together. Se7en was given the opportunity to listen to the song and afterwards he nagged JYP to let him perform it. Also, “When I Can’t Sing” was intended for G.O.D. Son Ho Young but it did not appear in his albums.

For the February 28 broadcast of “Strong Heart,” Se7en gave a more in-depth picture of how he ended up receiving “When I Can’t Sing” from JYP. After Se7en’s appearance on SBS “K-Pop Star” he had a get together with YG, JYP, and PSY.

At the get together, Se7en asked JYP to give him a song. “JYP thought for a while and then let us listen to ‘When I Can’t Sing.’ After I heard the song I thought that I needed it. JYP rejected me saying that he had saved the song to sing for himself. On the spot, I danced and sang as an impromptu audition in front of JYP.”

Well it looks like Se7en succeeded in moving JYP, the successful CEO and difficult judge!