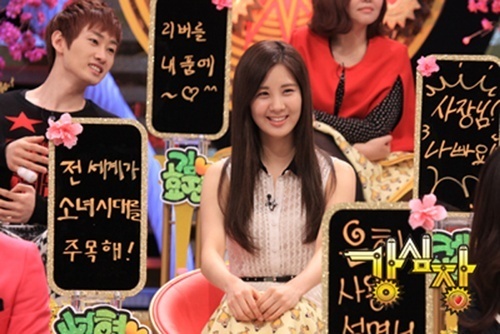 On February 29, Girls’ Generation’s Seohyun made an appearance on SBS “Strong Heart” and revealed for the first time that the group almost rejected the offer to perform on “The Late Show with David Letterman.”

“We first wanted to decline the call from David Letterman’s show. The stage was too small and there was no way all nine girls were going to dance on it. Also, we were going to promote with the remix version of our track, but they didn’t have the system to play the beat, and it was just too difficult to perform on that stage. So there were concerns that it might be better off just not appearing on the show at all,” Seohyun said.

“But they specially expanded the stage for us, and we were able to successfully finish our performance there,” she added.

Seohyun also said, “There were reservations about appearing on David Letterman’s show because of its format that puts more focus on the conversation with the host. We’re a group that promotes with our performance, so there were some concerns of going on the show.”

On January 31, the Girls’ Generation held a special live performance of their U.S. debut single, “The Boys,” on the popular CBS talk show, “The Late Show with David Letterman.” After the performance, netizens voiced their displeasure over the small size of the stage and how the performance felt a bit congested, so Seohyun’s story makes pretty good sense. You can see the full performance below!

David Letterman
Seohyun
Strong Heart
The Boys
How does this article make you feel?