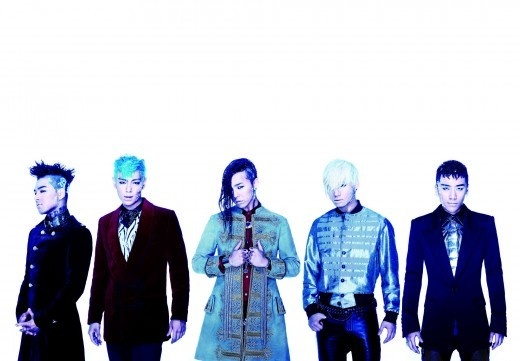 On February 29, BIGBANG released its fifth mini-album through various online music sites. Upon its release the album captured the top spots on Melon, Bugs, MNET, Soribada, and other music charts. Each of the newly released tracks, “Bad Boy,” “Love Dust,” “Blue,” “Fantastic Baby,” “Ain’t No Fun,” and “Wings” ranked in the top seven. The strength of BIGBANG was confirmed when even the album’s intro “Alive” took seventh place on various charts.

The album has been making an impact abroad as well. As YG previously predicted, the album is doing much better on iTunes than the single released a week ago. The album was reported to be in the top ten on the iTunes pop-chart in several countries. In Chile it is at number eight, in the United States and in Canada it has made its way to third.

It has been a busy day for fans as earlier today they had “Bad Boy” and “Big Bang Alive” Trending worldwide on Twitter.

The group’s first single “Blue” was released ahead of the other tracks last week and instantly took first place. The single held its ground up until the full album was made available. “Blue” was finally usurped by one of BIGBANG’s many other title tracks. BIGBANG’s latest release has captured the public’s interest with its diverse music offering. The track list will satisfy many tastes as it is well rounded with songs ranging from Hip-Hop, R&B, Ballad, Rock, Pop, Electronica, and combinations anywhere in between.

The album’s title “Alive” is a tribute to BIGBANG’s past challenges and ITS fighting spirit. Through all that has happened, they are stronger than before, and their passion burns hotter than ever. The album is the combined work of leader G-Dragon’s strong personality, along with YG Entertainment’s house producer Teddy.

BIGBANG keeps giving back to ITS faithful fans as the music video for their next title track “Bad Boy” was also revealed. Just like its predecessor, “Blue,” “Bad Boy” is another visually stunning music video. State of the art camera equipment was used to film the video. “Bad Boy” is a charming and compelling R&B, Hip-Hop song coupled with rhythmic hooks. The music video was filmed against the backdrop of the streets in Brooklyn, New York. In the video it has a vintage feel as the members are walking along and displaying all their emotions.

Here is the music video for “Bad Boy” If you have not had a chance to view it yet.

You can purchase the album through iTunes or a physical copy via YesAsia.

What are your thoughts on Big Bang’s comeback, album, and music videos?

Big Bang
itunes
How does this article make you feel?