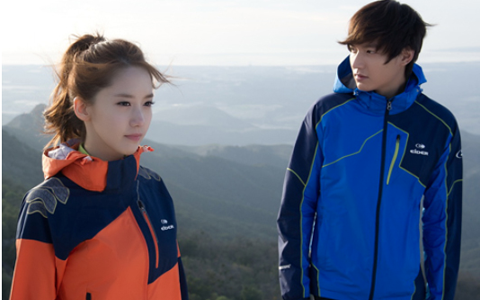 The rain-soaked advertising spot starring “Eider Friends” Lee Min Ho and Girls’ Generation’s YoonA is out. Like earlier teased in still shots, the 15-second commercial recently released shows the two drenched in rain but protected by the outerwear brand’s apparel.

Lee Min Ho and YoonA were announced to model for Eider in mid-2011. Their first campaign featured rock climbing and was shot in the United States. The “City Hunter” actor and the girl group member are the “2nd Eider Friends,” taking over modelling for the brand from actors Jang Hyuk and Chun Jung Myung, who endorsed the brand in 2010.

Meanwhile, Lee Min Ho is yet to announce his next project, although strong buzz has gathered around the offer for him to star in SBS’ historical-fantasy drama “Faith.” YoonA will soon be seen on small screen, starring in KBS’ “Love Rain,” co-starring Jang Geun Suk. “Love Rain” premieres on KBS in late March.

Eider
Lee Min Ho
YoonA
How does this article make you feel?