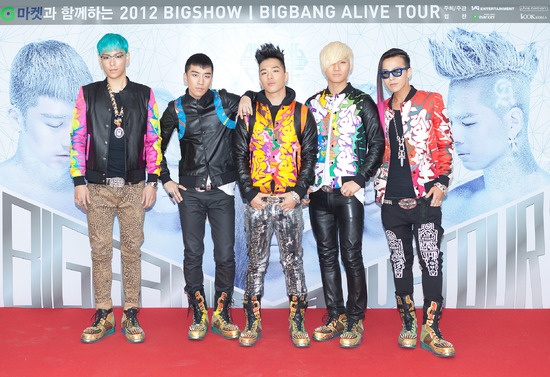 BIGBANG: “We Know a Lot of People Are Upset about Our Comeback”

On March 2, BIGBANG held a press conference prior to their first concert in nearly a year. They will hold their Seoul concert for three consecutive days before embarking on the first-ever world tour across 25 cities in 16 countries.

BIGBANG started off their statement with, “We’ll work hard to become a proud group. The only way to give back is through our music.” They explained the reason for naming their comeback album, “Alive,” by saying, “Our feelings and thoughts are thoroughly expressed in our new album. That’s why we named it ‘Alive.’”

G-Dragon said, “We know there are a lot of people who welcome our comeback, but at the same time, many people are upset about it. It’s all our fault. Because of the ‘incident,’ I caused a lot of disappointment. I think it’s our job now to turn BIGBANG back into a group with a lot of hope.”

It’s embarrassing, but I’ll be careful not to make the same mistake again. I’ll focus more on music and will work hard to make us a proud Korean group. I hope you will look at us on a positive light,” G-Dragon added.

Daesung also answered questions about his comeback, saying, “It was a chance to return to our roots. It made me look back and reflect on myself. I apologize and I will gladly accept your criticism, as well.”

The group went on to talk about their excitement over the start of their very first world tour concert. Taeyang said, “This concert will be different from the ‘Big Show’ concerts we’ve been doing. If the past shows brought us closer to the fans, this concert will have a strong overall storyline. It will be like a musical, or a ‘show that’s fun to watch.’”

Seungri said, “We worked extremely hard to give a change to our image, after a one year break. We changed our fashion and hairstyle a lot. You can expect a newly born BIGBANG that’s just making its way to the world.”

Meanwhile, BIGBANG released their fifth mini album, “Alive,” on February 29. The music video for their first single, “Blue,” has recorded over 11 million views since its first release on February 22. You can read the full review of the album here at Soompi’s exclusive BIGBANG showcase page!