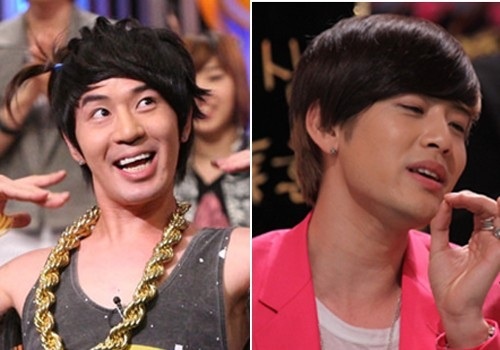 As we reported earlier, Se7en’s appearance on “Strong Heart” which was broadcast on February 28 and March 6 showed a nervous Boom. Boom stated that he could not sleep the night before, because back in high school, Boom had told Se7en “Your rap is the worst.”

On the episode broadcast on March 6, Se7en talked about how scary Boom was in high school. Se7en stated, “Boom is currently one of the best on variety shows. He was a very scary upperclassman in high school.” (Boom was two years above Se7en at Anyang Arts High School)

Se7en also said, “He kept saying that my rap sucked and until the moment he graduated, he would always keep one hand in his pocket. When I received the newcomer award a reporter came up to me saying ‘Shake it Boom’ and asked for an interview. Everything was so hectic, I remember that I didn’t even look at his face and ended it quickly.”

Se7en continued, “Afterwards I saw the broadcast and realized that the person who interviewed me looked a lot like Boom. I asked one of my high school friends and he said that it was in fact Boom.”

Se7en then asked Boom, “Why didn’t you act like you knew me?”

Boom replied, “You were very busy and it looked hectic. It’s fine.”

Then Se7en said, “It is not an easy job for Boom to act the way he does now, when he used to have so much charisma before. However, now he is one of the best. I am very proud of him as a fellow alumnus.”

The two shared a hug.

Boom
Se7en
How does this article make you feel?