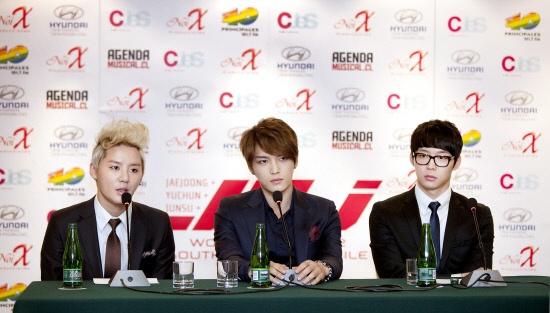 During a press conference held in Chile on March 8, JYJ opened up about the recording of them verbally abusing fans in 2009. The JYJ members read their prepared statements with grim faces.

(As we reported earlier: An online board uploaded an audio file of JYJ’s Jaejoong and Yoochun verbally and physically abusing fans. In the audio file, Jaejoong can be heard swearing at “Sasaeng Fans.” Sasaeng fans are extreme fans that engage in behaviors that are dangerously close to being stalkers.)

Yoochun began, “After debuting in 2004 we have received a lot of love from the public. However, we have also been pained because of Sasaeng fans for nearly 8 years. It felt like prison because someone would always follow me, watch me, and would try to share everything about me. No matter how I tried to get myself out, I had to continue receiving mental pain while feeling trapped.”

Junsu stated, “I endured the pain because Sasaeng fans are still fans. However, they used our identification to expose our private phone calls and GPS trackers were put on our cars. There were incidents of breaking and entering where a fan would take pictures of our private items. Some fans would try to kiss me while I was asleep and some fans tried to collide with our car in a taxi to see us in person.”

Junsu continued, “Our lives began to crumble as we would always be recorded, touched, and derided. We ask to be allowed at least a bare minimum of living as a human being, while we endure this indescribable pain.”

Jaejoong stated, “We want to give an apology for our unjust behavior in the past. We are sorry because of all the fans that worry for us and share our pain. In the future, we will think about the people that love us as public figures whenever we are in mentally difficult situations. We will think about the responsibility we have and never breakdown.”