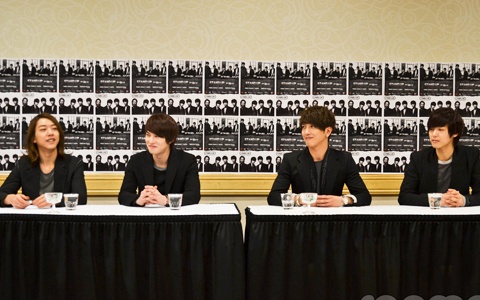 Just yesterday night, the two idol bands held their first ever joint concert at the Nokia Theater in Los Angeles.

In their first visit to the States, CN Blue shared their impression of America, international fame, the upcoming third album, and their newly-found love for American food (yes, steak and In-N-Out!). While the boys were professional and polished, they occasionally cracked up at each others’ comments and Yonghwa’s confident English skills.

CN Blue began the interview with their introductions:

Yonghwa: (in English) Hello. My name is Jung Yonghwa. My part is guitar and vocal.

Fanlala: I read online that each of you represents one letter in the word “Blue” — burning, loving, untouchable, and emotional. How did you decide each of those words for yourselves?

Jungshin and Yonghwa: We first had the team name CN Blue, which stands for Code Name Blue. Then we looked for words that would fit the letters “B, L, U, E.” We didn’t just pick random words. We thought through the words and the meanings, and so we came up with the words that we thought portrayed our characters.

Soompi: What is your most important goal for the year? Do you think you will be able to have a world tour?

Yonghwa: We are releasing our third album this month and so we are going to try to concentrate on our stages first. Then afterwards, Minhyuk the drummer is gearing up for a drama in Korea also. So we’re going to be balancing a lot of activities, but at the same time, we want to be a band that overall does a lot of shows and performances. Right now too, we are doing tours around Asia. Not just Asia, but if we get the chance we want to do many performances, many concerts all around the world.

APA: You guys are having your third album soon. I know there’s a contest going on right now for the title. Do you know any funny submissions yet?

Yonghwa: The way that this works is that the contest isn’t for picking the title song of our album. There’s already an answer and there’s a cube that’s rotating on our site. There are letters on it and so the fans have to guess what the title is by looking at that.

APA: Do you know if anyone who has already guessed it?

Yonghwa: We think it’s pretty easy, but we don’t know yet. But it was a pretty easy question. Someone probably guessed it by now.

Yonghwa: Did you figure it out yet? (Jonghyun and Yonghwa laugh.)

Fanlala: Did you expect to make it this big and find international fans, or are you still shocked by how popular you are worldwide?

Soompi: After Yonghwa did “We Got Married,” were the other members interested in participating? If they could join, which female partner would they want to film with?

(All the members smirk, and Jonghyun laughs during Yonghwa’s response.)

Yonghwa (after hearing “We Got Married,” he was quick to answer): The other members were very jealous of me because the show was very popular. They all have really high standards so they didn’t pick a partner they wanted to be with. They were just jealous that I was part of the show.

APA: Going off the third album again, is there something new that you want to portray through this album? Anything interesting that stands out?

Minhyuk and Yonghwa: We always think of what we can do to make the album different from what we had previously. This time we want to put in a more fast pace, upbeat and lively songs so that when we perform on stage, our fans can actually rock on with us.

Fanlala: Going off the fast, lively, upbeat, what messages do you try to convey with your new album and new sound?

Yonghwa: The message of this album is that we want to have fans actually not just listen to the song but give them songs that would have the fans take part in the concerts and stages more. The songs will seem more lively in actual stage performances compared to when listening on the CD, so we want fans to come out to these performances and stages where they can enjoy the performance with their whole body and not just through listening to the CD at home.

Soompi: Are there any American artists you would like to collaborate with outside of Korea?

Yonghwa (in English): First, Bon Jovi. Second, Red Hot Chili Peppers. Third, 30 Seconds to Mars. And Maroon 5, and… (he points to Minhyuk for his opinion).

Jonghyun: There’s a lot more, but too many to list them all.

APA: If you had to recruit someone from the other group (FT Island), who would it be?

Jungshin: Hongki for vocals because we do a lot of performances so we want another vocalist.

Jonghyun: Jaejin, the bassist in FT Island. I like Jungshin’s playing also, but their styles are very different. I feel like Jaejin plays it in a very supportive way so it’s easy to play together.

After he said that, Jungshin playfully said, “I want to change guitarist.”

Yonghwa: Jonghun, the guitarist. There would be a total of three guitars in the group and the sound will be very plentiful. It would sound much better with a louder sound.

Yonghwa: It’s better than anything we expected. We’ve always had a good image, so not that it would be bad, but it’s more than what we would have hoped for. We have always watched foreign artists on YouTube, and every time we did, there’s that portrayal of foreign artists in big cars, that stereotypical American rock star with the big car. The moment we got off the airport at LAX (Los Angeles International Airport), we saw the big car that we always see in videos parked for us! So we jumped in, turned up the music, and cruised through the streets of America. With our sunglasses on — Rayban sunglasses (laughs), and leather jackets. For overseas artists, to complete the picture, they have the beer or alcohol, but we had coffee instead. That’s the difference between us.

Yonghwa: I went to the gym today in the hotel, and felt like I was in a different world, a new world because all the other people are foreigners. While I was jogging and working out, I thought “Is this LA? Is this what I’m feeling? This is what LA is.”

Yonghwa: Yeah LA… Westside (tosses his hand up with a sign).

Soompi: I know you recently arrived in America, but have you tried out any restaurants? How do you like them compared to restaurants in Korea?

Yonghwa: We told our staff that we want to eat American food over Korean food because it’s easy to get that. We would like to try American food, and so we’ve been eating American food and we really like steak! We ate steak yesterday too, and want to try In-N-Out today if possible. We’ve heard about it a lot. It’s famous, and people from Korea want to try it. We haven’t been able to yet. (Note: In-N-Out is a popular American fast food chain restaurant that is predominantly found in California.)

Yonghwa: While I was cutting up my steak, I thought “this must be LA.” (Throws up hand signs again).

APA: Apart from the already planned cities where you’re going to have the concert, where else would you like to go to have concerts that are not planned yet?

Yonghwa: We will go anywhere that we are called to. Even if we’re not called to certain places, we will go. We have so much fun performing.

Fanlala: How would you describe your concert to someone who has never been to one before?

Yonghwa: We, CN Blue, are a group that shines the brightest when all four are on stage performing. We would want fans to see us at our strongest point, which is all four of us performing. We want our fans and people who listen to our music to feel the honesty in our music.

Soompi: Have other idols ever confessed that they are jealous of your unique position in the idol scene? Being bands and playing rock music, and the fact that you don’t have to dance? Or the other way around — do you ever feel like singing pop and dancing cool choreography?

Thank you Mnet for the opportunity to interview FT Island and CN Blue! Also thank you to Soompiers who submitted questions to our interview question bank.

If you haven’t yet, check out Part 1 for our interview with FT Island. Also, check out Soompi’s concert converage of FTISLAND & CNBLUE “Stand Up” by M Live.

interview
Jonghyun
Jungshin
Minhyuk
Soompi Exclusive
How does this article make you feel?